After eight extraordinarily productive years, Cees Dekker will transfer the Directorship of the Kavli Institute of Nanoscience Delft (KIND) to his younger colleague Chirlmin Joo.
Who is Dr. Joo?

(This article was originally published by TUDelft on August 29, 2018) 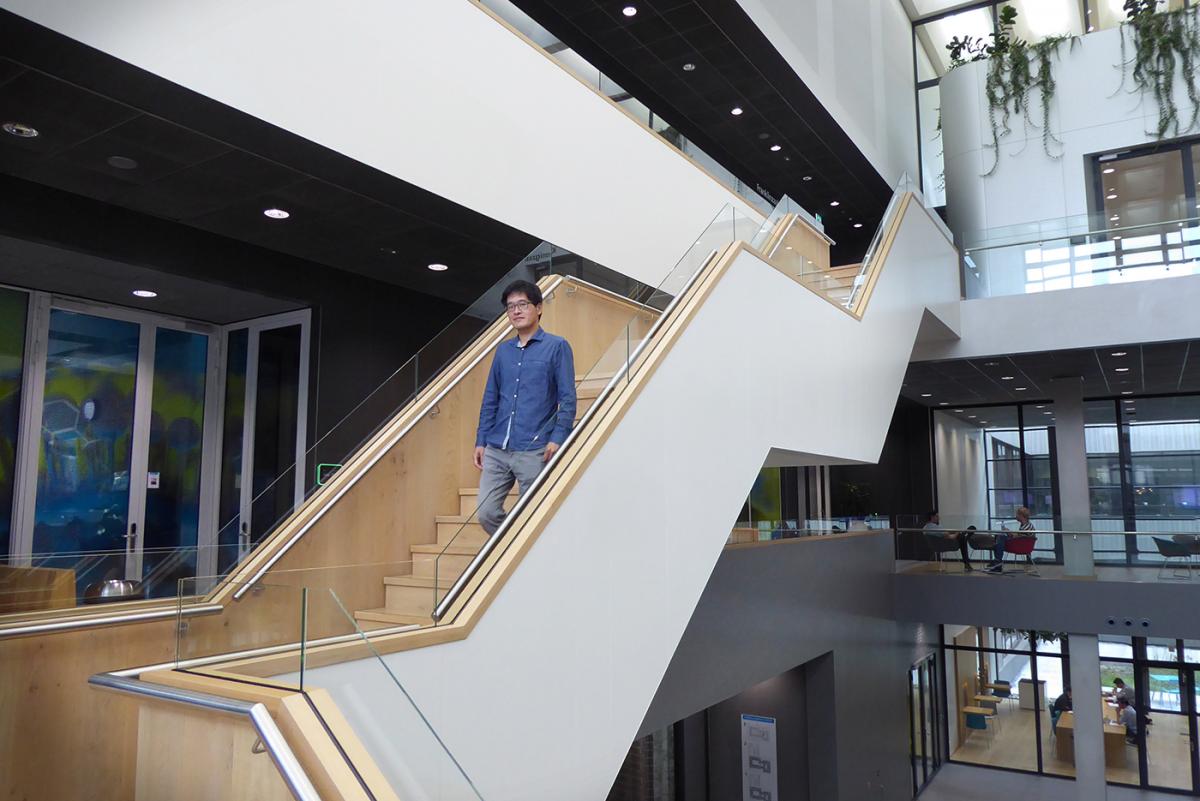 THIS YEAR'S KAVLI DAY on Neeltje Jans island will bustle with activities, talks and social events. At least one day a year, colleagues from the three different departments—quantumnano, bionano and Qutech—will meet and mingle. It’s one of Dr. Chirlmin Joo’s goals to have more cross-departmental projects within the Kavli Institute Nanoscience Delft (KIND), housed at the TU Delft Applied Science Faculty. Dr. Joo will be officially installed during this Kavli Day on 30 August 2018. KIND has two directors (also called co-directors). The other director is Professor Lieven Vandersypen in quantum nanoscience.

Congratulations on the Directorship. How do you feel about the appointment?
“It’s a big honour and, to some degree, also quite a surprise. Cees Dekker has been the leading figure in this KIND Directorship. He and I have 20 years of gap in the academic career. So I feel it’s a large leap I need to make to be a director. But we need a new leadership, and I am one of the first members of the bionanoscience and know the department by heart. So I’m very glad I have been given the opportunity to take this prestigious position.”

Aren’t you afraid this management work is going to compromise your research career?
“That’s not what came up to my mind when I was asked to consider this position. I think it rather helps my research because by being involved in high-level management, you get an opportunity to meet with other people doing very different sciences. This helps you not being trapped within the same research that you have been doing for many years.”

You studied physics in South Korea, and then you did your PhD on DNA repair at the University of Illinois. What motivated you as a physicist to focus on biological systems?
“As an undergraduate student, I liked physics very much. I really loved every aspect of it. It’s a beautiful science. But I also saw that there were not many open questions left. For example, when you learn physics, your interest tends to move towards more and more theory, e.g. high-energy physics. But there is not much what a single person can do anymore in such research fields. I felt like I wanted to own a certain project. At the time everyone around me was talking about biophysics, so I decided to do take biology courses. Surprisingly, it was very interesting to me who was not seriously considering a biophysics track. How molecular machineries make and control genetic material was fascinating enough to convert me to a biophysicist. After I applied for a PhD in Illinois, I visited various groups including a biophysics laboratory. I liked that I could see and manipulate molecules right under my eyes. During an internship, I enjoyed playing with all these molecular machineries like proteins and DNA. I thought: this is it! This is the track I want to go.”

Judging from the list of publications, you specialised in studying RNA and DNA dynamics with fluorescent molecules?
“Single molecule fluorescence is my main expertise. Using that, I studied how proteins are interacting with genetic material (DNA) during my PhD. But here, I am more focused on how proteins use small non-coding RNA for gene regulation.”

From Illinois, you moved back to the Seoul National University in Korea. And then, in 2011, you moved to Holland. What attracted you in Delft?
“After my postdoc in my home country, I had to make a decision whether I wanted to stay in Korea. In fact, I was given several (informal) offers from major universities in Korea. In the end, I decided I was too young to stay in my home country. I felt I still needed to learn a lot from new places for my 30 years of career ahead. Korea is doing great science nowadays, however, it is geographically isolated. So I wanted to go abroad and I was looking at several places in the US and Europe. I was familiar with Delft because from the moment I started my PhD there were many high-profile biophysics papers coming from TU Delft, mainly from Cees Dekker and Nynke Dekker at the time. I knew their research and I was also aware that the Netherlands is an English-friendly, international country. It was a place I had never been but I thought it could be a good place where I embed myself with new challenges. Also, Europe, in general, was new to me. What struck me was that by the time I arrived for the first time in Europe (at Schiphol airport), I felt very comfortable with Dutch culture. In the US where I did PhD, I didn’t feel so comfortable despite being there for five years.”

"The Dutch culture is very similar to the Korean one."

Is that the Dutch directness, or bluntness, that you appreciate?
“Yes, in a way. It makes me feel comfortable. I mean, when you’re upset, you just say so. Newly arriving expats find this Dutch culture shocking, but what’s wrong with that? My people in Korea are also more direct than people in the US. In that sense, it was an easy transition coming here. Also, I appreciate that Dutch people consider working together very important.”

So the Netherlands and Korea are remarkably similar?
“That is what I found, much to my own surprise. The American culture happens to be very influential to Korea but to be very different from the Korean culture, and the Dutch culture is totally unknown to Korea but is very similar to the Korean one. I’m not sure this is very relevant for the interview, though.”

The thing is that we want to meet the person who will be the new Kavli director. In the Kavli newsletter, you said you wanted more connection between the three Kavli departments: quantumnano, bionano and Qutech. How are you going to approach that?
“It’s a challenge. We all share a common interest in doing ‘nano’science. But working together is difficult. There can be two approaches: top-down, and bottom-up. Top-down is to find a common core that we can share. For example, KIND has arranged shared facilities for KIND colleagues. Cees and Lieven expanded these to shared post-doc fellow positions. It will be an interesting attempt to further expand them, e.g. create a theory forum where mathematical tools are exchanged three departments. This is one of the interesting ideas that I was offered by my colleagues. Having core facilities, either physical or manpower, we will be able to create synergy between the departments.”

"Historically we are one, but now we are very different siblings."

Nowadays you have the yearly Kavli day where people across the departments meet. But apparently, that is not enough to make it one group?
“No, it is not. If you have a bio background, it’s quite frightening to approach a poster that is about quantum physics. That brings me to the second way of promoting coherence through the bottom-up approach. I think we need incentives such as financial support for cross-disciplinary bachelor or master projects, or even PhD projects. The former directors have brought sufficient funding to realize new activities, and this can be one of them.”

Why do you want the departments to interact more?
“That’s a tricky question. We started as one Kavli institute under the directorship of Hans Mooij. Cees Dekker then had the vision of creating bionanoscience. Afterwards, Qutech branched out. So historically we are one, so it’s easy to say we have to be together. But now we are very different siblings.”

The Kavli institute evolved in three directions. So why even try to get them under one denominator again?
“Just like many disciplines, by exchanging ideas between very different people with different backgrounds we can create something entirely new. For example, new breakthroughs in life sciences come from developing new techniques, and development of the new techniques mainly comes from physicists. It is because physicists are excellent tool developers. Just look at how the structural biology field has evolved with physicists’ invention of crystallography, electron microscopy, and single-molecule techniques. If we (bionano) want to remain the pioneers in bionanoscience, we need to have new influx from the quantum side allowing us to do new science. Likewise, at the quantum side, they are doing absolutely outstanding science in quantum, but I hear several of them are also interested in biology, for example, quantum biology.”

And you think that quantum physics might provide better understanding?
“Some people have floated that idea. It’s not a research field that anyone in KIND is working on yet. But that could be a new research area in KIND if there is anyone interested in doing so.

To round things off: Hans Mooij was Kavli’s first director when the institute in Delft was established in 2004. Cees Dekker founded the bionanoscience in 2010. What will you be remembered for?
“As to my legacy, I think that is very much an open question yet, but the first one that comes up to my mind is to create synergy cores in KIND. But for now, the challenge is to keep up with what Cees Dekker has done so far. So many things happened during these last eight years of his directorship. Maintaining that level of excellence is already tough. I will have gained overview of the KIND activities within the next few months. The remaining three and plus years, my job is to find out how to make this Kavli Institute in Delft even better. In September I’ll meet with the directors of the other 19 Kavli institutes in Oslo to see what they are working on and what we can learn from them....” 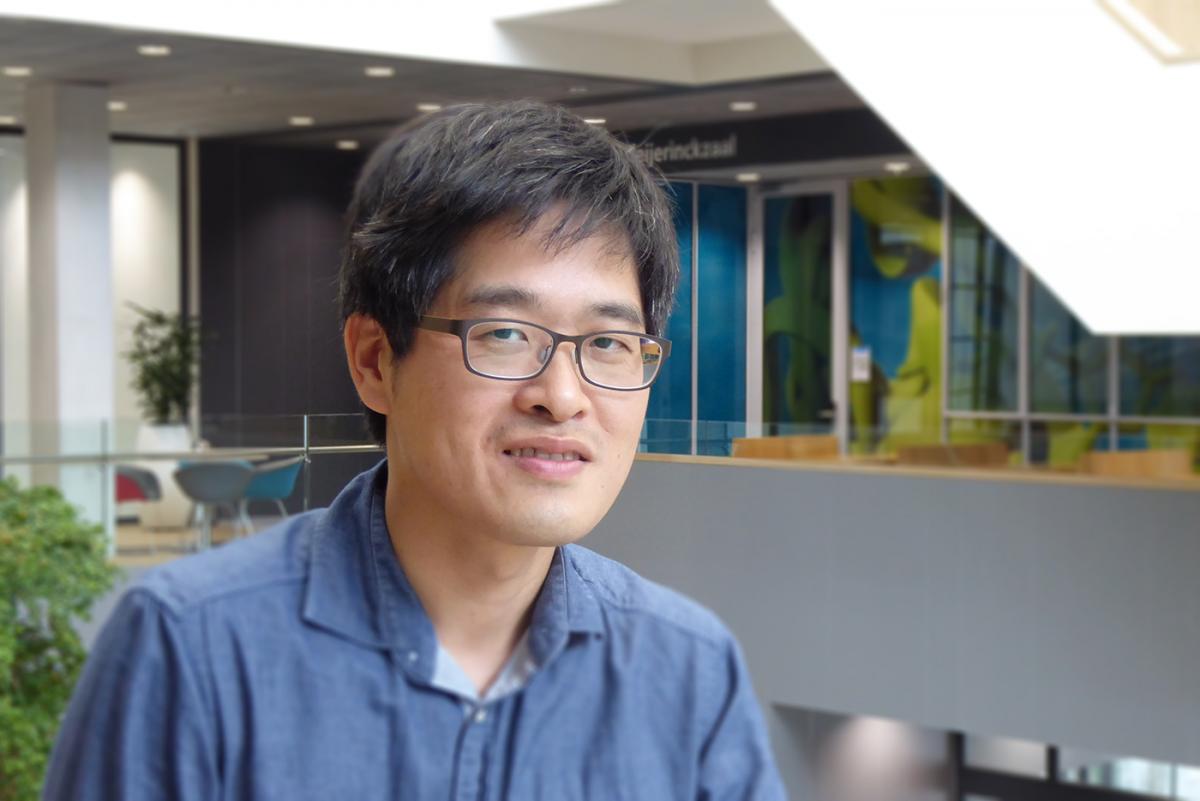 Joo has perfected his single-molecule fluorescence technique to reveal the molecular mechanisms of microRNA in gene silencing and in the CRISPR system (a high-precision gene editing technique). He is a recipient of prestigious grants such as NWO-Vidi and ERC Starting Grant. Last year, Joo received a 2.3 million Euro grant from FOM for the development of a single-molecule protein sequencer. In the project, he is joined by Cees Dekker and Rienk Eelkema (TU Delft) and by colleagues from Groningen and Wageningen Universities.