From their seats in the Morrison Planetarium at the California Academy of Sciences in San Francisco, visitors swoop through a redwood forest, into a single redwood leaf and finally into an individual cell to watch photosynthesis take place. Then they travel back billions of years to watch the first stars wink on, heat up and explode, scattering into space many of life’s essential chemical elements.

The point of the show, “Life: A Cosmic Story,” narrated by Jodie Foster, is that the connections between living things go all the way back to the distribution of dark matter in the early universe; its gravitational influence allowed the formation of galaxies, stars and planets. Unlike shows of a decade ago, all the animations of things we can’t see are based on real scientific data – including visualizations made by researchers at KIPAC, the Kavli Institute for Particle Astrophysics and Cosmology, at SLAC National Accelerator Laboratory and Stanford University. 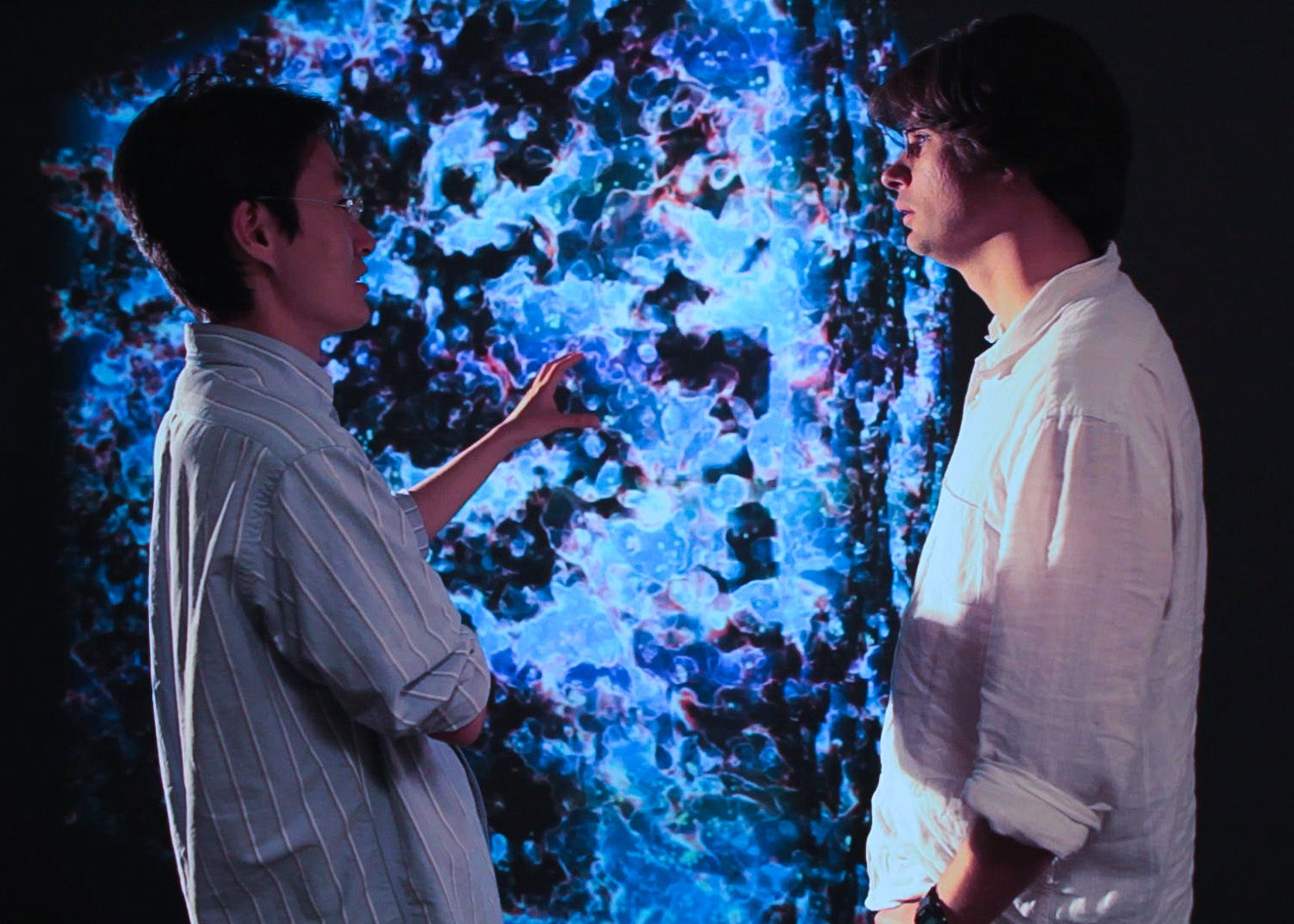 “Rather than relying purely on artistry and artwork to communicate the science, it’s going to the scientists and using the same data they’re using to create visuals,” said Ryan Wyatt, who directs Morrison Planetarium and the science visualization staff at the California Academy of Sciences. “To my mind that’s incredibly valuable. It’s authentic. It allows people to experience the science in a way they probably can’t do elsewhere.”

This is the third planetarium show that KIPAC scientists Ralf Kaehler and Tom Abel have collaborated on, and the fifth for Abel. “Life” at the Morrison features their animation of the birth and death of the earliest stars, an area in which Abel is a world expert. A similar visualization appears in “Journey to the Stars,” narrated by Whoopi Goldberg, now playing at New York City’s Hayden Planetarium. The team also contributed to a show narrated by Liam Neeson that welcomes visitors to the Hayden. For that, they put together a sequence that shows massive galaxies in the early universe colliding, merging and spinning away from each other.

Often created from simulations that scientists have run as part of their research, these visualizations are “kind of a byproduct of this work,” Kaehler says. “And it’s a great way of doing public outreach.” The pair’s work has appeared in books, newspapers, TV shows, exhibits and magazines – including, in February 2003, the first computer-generated image on the cover of National Geographic.

Science-based planetarium shows are the latest advance in a tradition that dates back centuries. The first attempts were hollow globes, big enough to let a few people inside, pricked with holes to let “starlight” in. About 85 years ago, the first modern planetarium opened in Munich; a light projector made by the Carl Zeiss Co. splashed starlight onto the dark, concave surface of the dome. Soon planetariums were springing up by the hundreds – from small ones used for teaching to large domes that seated hundreds of people. For many visitors, the technology provided their first glimpse of a truly dark sky, undimmed by city lights.

In 2000, the opening of the new Hayden Planetarium at the American Museum of Natural History showcased a major leap in technology: The first show based on visualizations of real scientific data. Observations of the locations and brightness of more than 100,000 stars came from the European Space Agency’s Hipparcos satellite. Data on 45,000 galaxies came from an astronomer at the University of Hawaii. And data collected over the years on the Orion Nebula, a giant gas cloud studded with newborn stars, allowed visitors to fly through a stunning 3-D version of the nebula as if on magic carpets.

Presenting that show required a Silicon Graphics Onyx2 supercomputer, said Wyatt, who worked at the Hayden before joining the Morrison Planetarium. With the huge increases in computing power over the past decade, it can now be done with seven desktop computers.

Planning and developing a planetarium show can take anywhere from 16 months to two years. For Abel and Kaehler, the process may start six months before the show is slated to go public, with a request for a visualization that will tell a story spanning billions of years in the space of a minute or two.

Abel, an associate professor of physics at SLAC and Stanford, leads KIPAC’s Computational Physics Department and specializes in creating numerical simulations – computer models based on scientific data and complex equations that describe the laws of physics. Simulations have become a valuable tool – a sort of third arm of science, alongside theory and experiment – for understanding how nature works, allowing researchers to grasp patterns that are otherwise hidden inside reams of data.

A simulation of how the first stars formed might start with a map of the cosmic microwave background radiation, which has been measured in great detail by spacecraft. Scientists think these tiny variations in the energy left over from the big bang provided the gravitational seeds around which stars and galaxies formed.

The simulation software, which usually runs on large computer clusters, divides an enormous region of space, up to hundreds of thousands of light years across, into cubes. Within each of those cubes the software calculates physical quantities, such as the density, temperature, and velocity of hydrogen gas, Kaehler said. Then it divides those cubes into even smaller ones, identifies the regions where stars are most likely to form, and does another round of calculations. This is repeated until the simulation has zoomed in close enough to the star-forming regions to capture all the relevant physics with sufficient accuracy.

But that still doesn’t give researchers a picture – just millions and billions of computer-generated numbers. It’s the job of Kaehler, a research software developer at KIPAC, to turn those numbers into visualizations – both stills and animations – that allow the viewer to grasp what’s happening in a clear and intuitive way.

This involves a lot of software engineering, he said. “Since we’re building all our 3-D visualization software from scratch, we can tailor everything just the way we need it. Writing the code is a lot of work, but it also gives us a lot of freedom.” Among other things, the visualization has to take into account what path the camera will take through the 3-D world the scientists have created, and what colors that world is painted in.

For “Life: A Cosmic Story,” the scientists worked closely with the Academy’s production staff, whose members could claim a combined total of 120 years of visualization experience, Wyatt said. Kaehler and Abel, he said, “bring their technical savvy and scientific background, and work with our visual sensibilities.”

The Morrison Planetarium draws about 750,000 visitors per year, Wyatt said, and he is working to make “Life” available to the estimated 700 to 800 other planetarium domes that are capable of playing it. As the show makes it way out into the expanding universe of planetarium fans, it may turn out that Abel and Kaehler’s outreach efforts have a very long reach indeed.