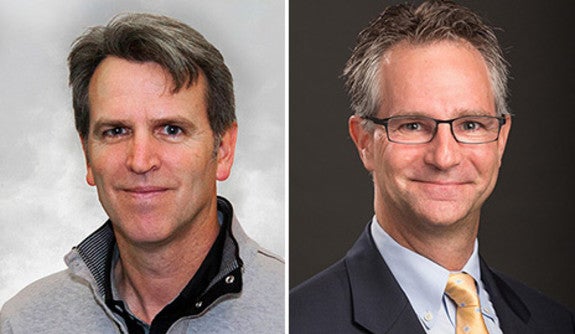 Two Yale School of Medicine professors have received a federal grant supported by President Obama’s BRAIN Initiative. In 2014, the White House announced over $300 million in new investments to support public and private efforts that would “revolutionize” understanding of the brain and brain disorders such as Alzheimer’s, schizophrenia, and autism, among others.

R. Todd Constable, professor of diagnostic radiology, and Michael C. Crair, professor of neurobiology and a member of the Kavli Institute for Neuroscience, will use the nearly $5 million National Institutes of Health award over three years to develop experimental and analytic methods for examining neuronal activity across scales, from the single cell to the whole brain.

The researchers will use novel technologies, including genetically encoded calcium indicators and functional magnetic resonance imaging, to study brain circuits and behavior through development. Their work will provide a novel set of tools to investigate the role of specific cell populations on brain function in healthy development and in disease models.

Other members of the Yale team include Kavli Institute members Jessica Cardin and Michael Higley, as well as D.S. Fahmeed Hyder and Xenios Papademetris.