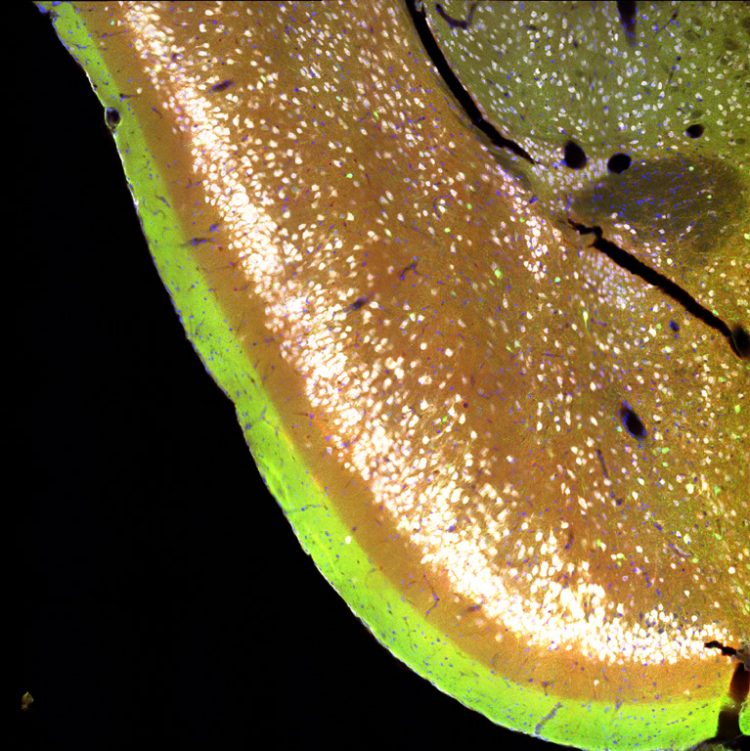 Staining one section of the brain, as shown, reveals layers of the piriform cortex—in green, brownish-red, and white—and other cells of the brain in blue.

Can you tell the smell of a rose from the scent of a lilac? If so, you have your brain’s piriform cortex to thank. Compared to many parts of the brain, the piriform cortex—which lets animals and humans process information about smells—looks like a messy jumble of connections between cells called neurons. Now, Salk Institute researchers have illuminated how the randomness of the piriform cortex is actually critical to how the brain distinguishes between similar odors.

Aside from better understanding how smells are processed, the new research, published in the Journal of Comparative Neurology on July 17, 2018, could also lead to greater insight into how some parts of the brain organize information.

When odorant molecules—the signature of any given smell—bind to the receptors in a person’s nose, the signal is transmitted to the olfactory bulb, and from there to the piriform cortex. In other sensory systems—like the visual system—information maintains a strict order as it moves through the brain. Particular parts of the eye, for instance, always transmit information to specific parts of the visual cortex. But researchers have long known that this order is missing in the piriform cortex.

“We haven’t been able to discern any order in the piriform cortex connections in any species,” says coauthor Shyam Srinivasan, an assistant project scientist at the University of California San Diego’s Kavli Institute for Brain and Mind. “Any given odor lights up about 10 percent of neurons that seem to be scattered all over the piriform cortex.”

To start working out the details of how the piriform cortex encodes odor information—and whether its connections are truly random—Stevens and Srinivasan analyzed the piriform cortices of nine mice using a variety of staining and microscopy techniques that let them visualize different cell types in the brain region. Their first goal: to quantify the number and density of cells in the piriform cortex. 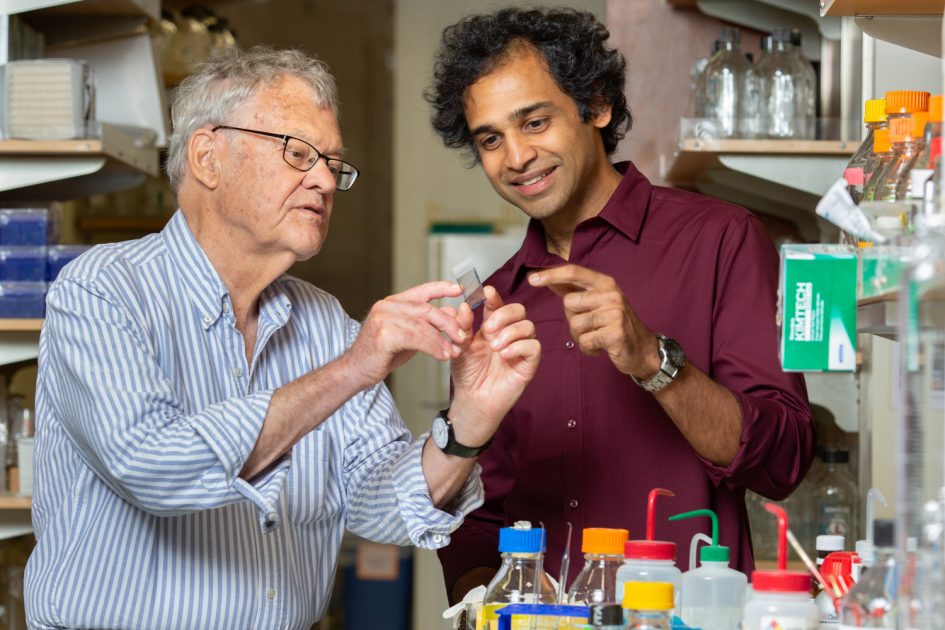 “This was really like a survey,” explains Srinivasan. “We counted the cells in different representative areas and averaged them across the whole region.”

The mouse piriform cortex, they concluded, has around half a million neurons in it, divided equally between the larger, less dense posterior piriform and the smaller, more dense anterior piriform.

“Every cell in the piriform is getting information from essentially every odor receptor there is,” says Stevens. “There’s not one ‘coffee smell’ neuron but a whole bunch of coffee cell neurons all over the place.” Rather than a single receptor detecting one odor and lighting up one cluster of telltale neurons, he explains, each odor has a fingerprint that’s based more on the strength of the connections—while the smell of coffee may activate nearly the same neurons in the piriform cortex as the smell of chocolate, they’ll activate each neuron to a different degree.

“One advantage to this system is that it can encode very complex information,” says Srinivasan. “It also makes it very robust to noise.” If one neuron sends a “noisy” signal—stronger or weaker activation than it should—the noise gets cancelled out by the many other neurons sending simultaneous, more accurate signals.

The researchers would like to repeat the work in other animals to see where similarities and differences lie. They also are interested in looking into other areas of the brain that have long been assumed to be dominated by seemingly random connections to see if they’re organized in the same way.

Stevens and Srinivasan, who also had a paper come out in the Journal of Neuroscience on July 13 about using the fruit fly olfactory learning circuit to improve the current crop of deep learning algorithms, were funded by the Kavli Institute for Brain and Mind at UC San Diego and the National Science Foundation.