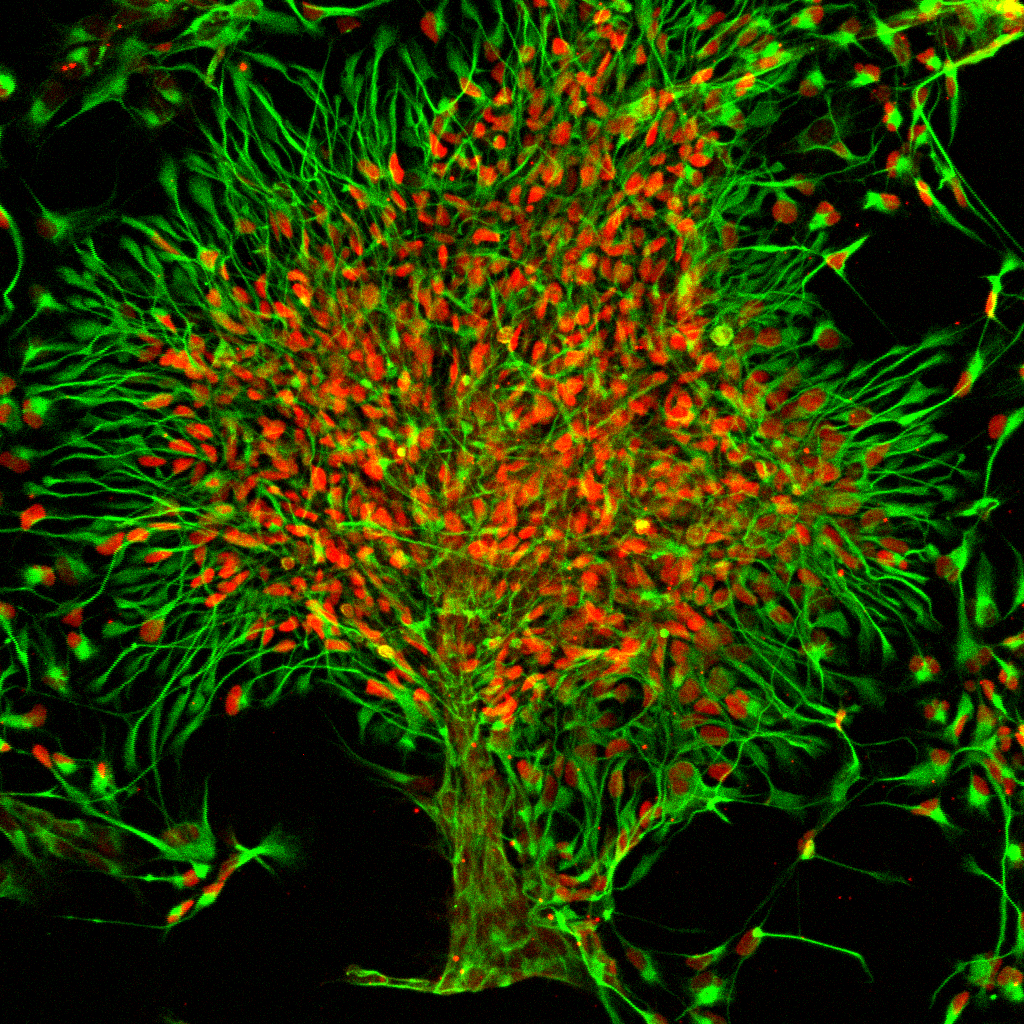 A stylized microscopy image of forebrain neural progenitor cells from chimpanzees described in the publication. The image represents the work’s potential for offering insights into the evolution of the primate tree of life. (Credit: Salk Institute/Carol Marchetto/Ana P.D. Mendes)

What makes us human, and where does this mysterious property of “humanness” come from? Humans are genetically similar to chimpanzees and bonobos, yet there exist obvious behavioral and cognitive differences. Now, researchers from the Salk Institute, in collaboration with researchers from the anthropology department at UC San Diego, have developed a strategy to more easily study the early development of human neurons compared with the neurons of nonhuman primates. The study, which appeared in eLife on February 7, 2019, offers scientists a novel tool for fundamental brain research.

“This study provides insights into the developmental organization of the brain and lays the groundwork for further comparative analyses between humans and nonhuman primates,” says one of the senior authors of the study, Salk President and Professor Rusty Gage, who holds the Vi and John Adler Chair for Research on Age-Related Neurodegenerative Disease. Gage is also co-director of the Kavli Institute for Brain and Mind at UC San Diego.

To accomplish this task, the Gage lab devised a new method utilizing stem cell technology to take skin cells from primates and coax them, via a virus and chemical cocktails, to develop into neural progenitor cells, a cell type that has the ability to become multiple types of cells in the brain, including neurons. These new primate cell lines can then be perpetually propagated, allowing researchers new avenues to study aspects of neuronal development of live neurons without tissue samples from endangered primates such as chimpanzees and bonobos.

“This is a novel strategy to study human evolution,” says Carol Marchetto, a Salk senior staff scientist in the Laboratory of Genetics, co-first author and one of the study’s senior authors. “We are happy to share these primate cell lines with the scientific community, so that researchers from around the world can examine primate brain development without the use of tissue samples. We anticipate this will lead to numerous new findings over the next few years about the brain’s evolution.”

In order to compare neuron movement and maturation outside of a dish, the scientists transplanted the neural progenitor cells from both humans and chimpanzees into the brains of rodents, enabling the neurons to thrive and providing additional developmental cues for the neurons to develop.

The researchers then analyzed the differences in migration distance, shape and size of the neurons for up to 19 weeks after transplantation. They observed the length, density and quantity of extensions of the neurons called dendrites, as well as the size of the cell bodies, which house the nucleus and DNA. 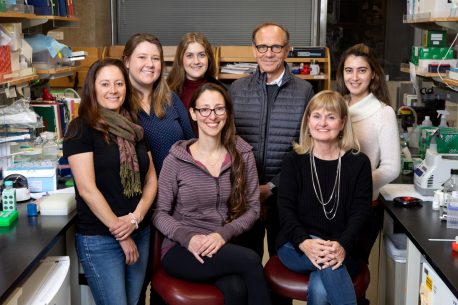 The chimpanzee neurons migrated a greater distance and covered a 76 percent greater area than the human neurons after two weeks. Human neurons were slower to develop but reached longer lengths than the chimpanzee neurons. This slower growth pattern may allow humans to reach more developmental milestones than nonhuman primates, which could account for differences in behavior and cognitive abilities.

In the future, the authors hope to construct an evolutionary tree of multiple primate species, utilizing induced pluripotent stem cell lines, to better understand of the evolution of the human brain. In addition, the authors plan to use this platform to study gene regulation differences between primate species that underlie the differences in neuronal maturation and can potentially impact brain organization in humans.

“We have limited knowledge about the evolution of the brain, especially when it comes to differences in cellular development between species,” says Marchetto. “We’re excited about the tremendous possibilities this work opens up for the field of neuroscience and brain evolution.”

The work and the researchers involved were supported by grants from the National Institutes of Health, the Leona M. and Harry B. Helmsley Charitable Trust, the California Institute for Regenerative Medicine and the Brain and Behavior Research Foundation (formerly the National Alliance for Research on Schizophrenia and Depression).