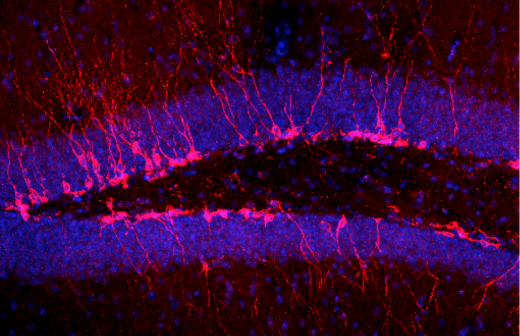 Though few in number, neurons that are created in the brain during adulthood—through a process called neurogenesis—have an outsized impact on mood and memory because of their unparalleled networking and communication abilities, according to a new study led by scientists at Columbia University Vagelos College of Physicians and Surgeons together with researchers at Hunter College and New York University.

The study, conducted in adult mice, showed that unlike other neurons in the brain, young neurons can directly connect with their mature counterparts and send out tailored messages depending on the source of incoming information.

“Without these cells, we would be incapable of distinguishing similar situations from each other, a process sometimes termed pattern separation, which is critical not only for forming novel memories but also for discriminating between safe and dangerous contexts,” says the study’s senior leader Rene Hen, PhD, professor of psychiatry and neuroscience at Columbia University Vagelos College of Physicians and Surgeons and director of the division of systems neuroscience at the New York State Psychiatric Institute. Hen is also a member of the Kavli Institute for Brain Science at Columbia.

“This study now shows us how a limited number of these cells can have such a big influence.”

The findings, published May 9 in the journal Science, may help researchers develop new treatments for memory loss and mood disorders and may explain why electroconvulsive therapy works for many patients with severe depression.

In adult humans, neurogenesis only happens in the hippocampus, a small region of the brain that’s important for creating memories and regulating mood. At most, young neurons make up about 5% of the neurons in the region.

Even though they’re outnumbered by more mature neurons, the young neurons have a strong influence on hippocampal functions.

These young neurons continuously monitor our surroundings for new developments, prevent old memories from interfering with new ones, and help us distinguish between similar memories, an important task for preventing the excessive generalization often observed in anxiety disorders. The young neurons also play a role in depression, as new neurons must be created in order for SSRI antidepressants to work.

The tasks shouldered by the new neurons require a lot of computation, but it’s been unclear how such a small number of neurons can cope.

What the Study Found

Using optogenetics, a method for activating or silencing specific neurons with light, the researchers found that young neurons in adult mice directly connect with mature cells during a specific critical period.

“Mature neurons in this part of the brain cannot synapse directly with each other,” says lead author Victor M. Luna, PhD, assistant professor of clinical neurobiology. “Since only young neurons make these types of connections, this small population of neurons can have a disproportionate and rapid influence on mood and cognition.”

By recording the activity of young neurons, the researchers also found that the young neurons have a unique ability to excite or inhibit more established mature neurons in the hippocampus (most cells are limited and can only excite or only inhibit).

According to Luna, these opposing mechanisms appear to be important for “increasing the contrast between highly similar memories.” Indeed, the researchers found that eliminating adult neurogenesis prevented mice from learning tasks where subtle differences in novelty and space distinguish one memory from another.

Hen and Luna were able to identify the neurotransmitters and receptors that the young neurons use to excite or inhibit more mature neurons. “That gives us information we need to develop drugs that could mimic the young neurons,” Hen says.

“There are two areas where these findings could be beneficial,” Luna adds. “One possibility is that we may find ways to harness this system to improve cognition in older adults, including those with Alzheimer’s disease. And it may also be possible to develop better, faster-acting antidepressants that skip the need for new neurons.”

The findings may also explain why electroconvulsive therapy (ECT) can have potent antidepressant effects. Though SSRIs work by increasing neurogenesis, the benefits of ECT happen too fast to work through neurogenesis, which takes four to six weeks. Instead, Hen and Luna think that ECT may be triggering mature neurons to sprout new axons and behave like young neurons.