A half-mile down in an old iron ore mine in Minnesota, incredibly sensitive detectors have been waiting for a particle of dark matter, an invisible substance that may form the skeleton of galaxies, to make itself known.

A consortium of research scientists, including Kavli Institute for Particle Astrophysics and Cosmology (KIPAC) physicist Blas Cabrera, anticipated the detection of a predicted-but-undiscovered dark particle known as a weakly interacting massive particle, or WIMP. The hope was that several WIMPs would travel through space and a half-mile of Earth to plunk themselves into the nuclei of germanium atoms in the detectors, each collision creating a vibration and a tiny puff of heat that would signal the WIMP's existence.

WIMPs are leading candidates for dark matter, the unseen stuff that accounts for 85 percent of the entire mass of the universe. Billions of WIMPs may be passing unnoticed through the bodies of humans every second. 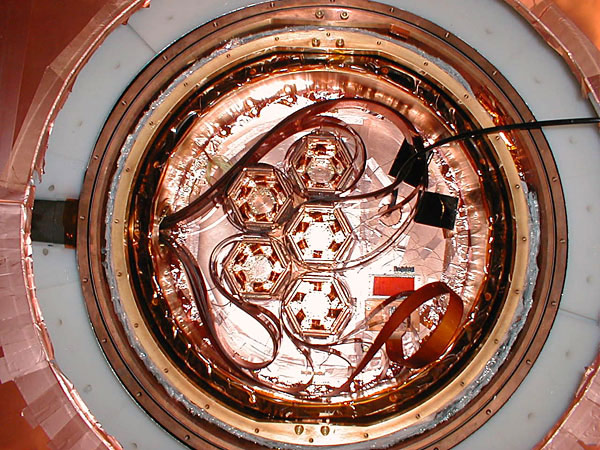 The CDMS II detectors (hexagons) are stacked in an icebox with six insulating layers to keep the instruments cold. Wires carry measurements from the detectors to computers outside.

The Cryogenic Dark Matter Search was somewhat like waiting for a phone call from the early moments of the universe, when dark matter was formed. But in this case, the phone never rang. The detectors in the clean room at the bottom of the mine, cooled within a whisper of absolute zero, recorded no WIMPS. Scientists call that a "null result," but it is still valuable, Cabrera said.

By building the world's most sensitive and accurate WIMP detectors—a feat comparable to building the best telescope to search the skies—the researchers can now relay the word to other scientists that detectors must be built bigger if they are to have a fighting chance of finding the elusive WIMP.

So the Cryogenic Dark Matter Search, which started out in an underground tunnel at Stanford before moving to the Soudan mine in Minnesota, will next move to a deeper site at Snolab in Canada. The detectors will grow from 3.7 kilos of germanium to 25 kilos.

With a larger detector, as with a wider telescope, "You will be able to see things you've never been able to see before," Cabrera said.