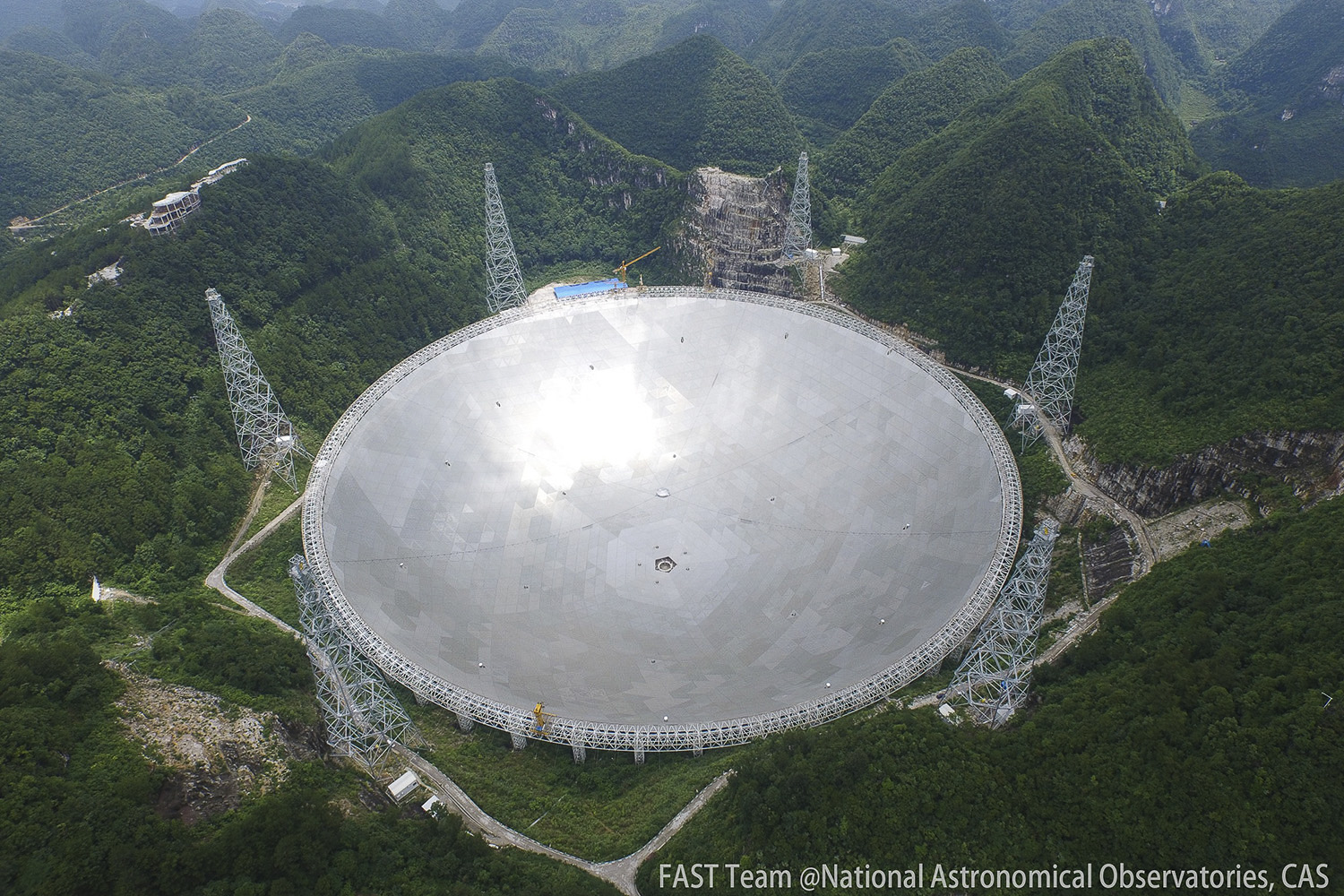 “One of our collaborators in Germany, who was up at the time, used the FAST data to search in 10 years of Fermi data – and boom! There was the pulsar,” said Stanford physicist Peter Michelson, a member of the Kavli Institute for Particle Astrophysics and Cosmology (KIPAC).

FAST had detected a faint pulsar with a spin period of just 5.19 milliseconds, and estimated to be 4,000 light-years away – likely the faintest millisecond pulsar ever detected. The discovery was the first of its kind from the collaboration between Fermi LAT and FAST, a partnership spearheaded by Michelson.

With Michelson as the principal investigator, the Fermi LAT team, an international collaboration, has discovered hundreds of pulsars since its launch 10 years ago this June. Pulsars are rapidly spinning neutron stars that release beams of electromagnetic waves as they rotate. Similar to the rotating beam of light from a lighthouse, the pulses of energy from pulsars occur at regular intervals ranging from milliseconds to seconds. Large radio telescopes detect pulses in the radio wave range of the electromagnetic spectrum while the Fermi LAT detects pulses in the gamma-ray range.

The partnership between Fermi LAT and China’s FAST significantly improves the ability of scientists to detect the faintest pulsars, called millisecond pulsars. The Fermi LAT can detect gamma-rays from suspected pulsars, but can’t determine the rotation period of a rapidly spinning pulsar. That’s where radio telescopes such as FAST come in. When directed to search for radio pulses from the regions of the sky where Fermi detected gamma-rays, FAST can determine the rotation period.

But that’s only if the radio telescope is sensitive enough to detect the radio pulses. FAST’s enormous 500-meter diameter dish makes it the most sensitive radio telescope on the planet for this purpose, which means FAST can detect pulsars that other radio telescopes overlook, such as the extremely faint millisecond pulsar detected in February.

The Fermi LAT collaboration has been international from the start, involving hundreds of scientists from institutions in the United States, Japan, France, Italy and Sweden. Since its launch, scientists from China, Germany, Spain, South Africa and Thailand have joined the team.

In the spring of 2017, Michelson, who is also the Luke Blossom Professor in the School of Humanities and Sciences, spoke with Chinese physicist Xian Hou about initiating a collaboration with FAST. Hou is a collaborator on the Fermi LAT team and also a scientist at the Chinese Academy of Science’s Yunnan Observatory.

To kick off the collaboration, Fermi LAT scientists gave the Chinese team a list of locations in the sky where they had detected possible pulsars. The FAST team looked at a source that had previously been examined by Arecibo, a radio telescope in Puerto Rico operated by the University of Central Florida, but that failed to detect radio pulsations from the source. FAST’s more sensitive equipment succeeded, revealing one of the faintest pulsars detected to date.

The discovery demonstrated the capability of FAST to detect pulsars that are too faint to be detected by less-sensitive radio telescopes like Arecibo. “That was pretty exciting,” said Michelson.

From a scientific standpoint, the finding is significant because it suggests future discoveries of many more pulsars, which together, Michelson explained, may help detect low-frequency gravitational waves traveling through the galaxy that can modulate the arrival times of pulsations from these sources.

Michelson is proud of the team’s discovery but is most proud of the collaborative effort. “It’s not just the science. The part I think is important to me is that it’s truly an international collaboration,” he said. One of the reasons he thinks collaborations are so important: “Particularly with countries we sometimes have strained relations with, it’s important to work on things where you share a common purpose and there is a benefit to all involved. That’s important in the long run.”

Michelson also sees cost benefits from international collaborations, especially in the field of astronomy, due to the expensive facilities required for experiments. “No one nation can afford to invest in all the experiments,” he said. “In astrophysics in particular, state-of-the-art facilities cost a lot. It’s important for scientists around the globe to share access to data from these facilities that will enable important science. Everyone can benefit from this.”

As a mentor to graduate students in Stanford’s Department of Physics, Michelson strives to teach his students the importance of international collaborations through working with Fermi. “It’s what science does beyond just doing science,” he said. “It connects cultures.”