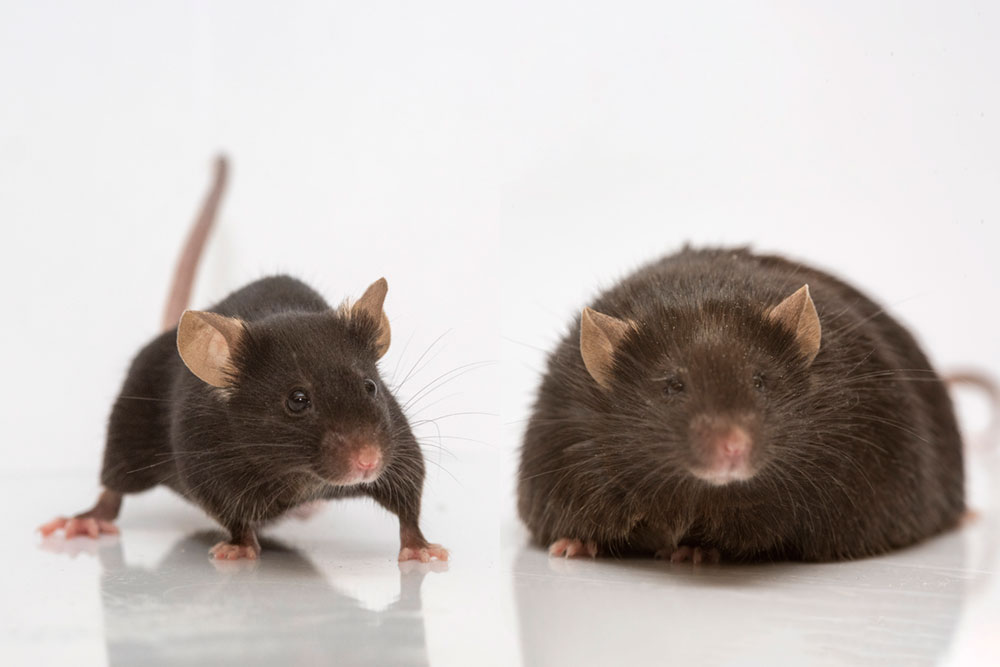 The mouse on the right lacks leptin, a hormone that curbs appetite.

Obesity is a major public-health problem in the United States and around the world, with an estimated 650 million people suffering from the condition. One of the biggest challenges of this ever-worsening condition is figuring out why people become obese in the first place, and why some people are more vulnerable to obesity than others.

Now, scientists at The Rockefeller University and collaborators have identified a genetic mechanism that may play a role in at least 10 percent of all obesity cases. The findings, which could help identify individuals with treatable forms of the condition, shed new light on the biology of the hormone leptin, which is produced in fat cells and controls hunger. The amount of leptin in the bloodstream, and how the brain responds to it, help determine how much weight a person will gain.

The scientists report this week in Nature Medicine that, in mice, alterations in the cellular machinery that regulates leptin production can lead to a form of obesity treatable with leptin therapy. Evidence from human genetics studies further suggests that a similar mechanism may contribute to obesity in a subset of patients.

How leptin is finetuned

Discovered 25 years ago by Rockefeller scientist Jeffrey M. Friedman, the Marilyn M. Simpson Professor and a member of the Kavli Institute for Neural Systems, leptin has been the subject of many thousands of studies exploring its structure and function. “We’ve learned a lot about leptin,” says Olof Dallner, research associate and lead author of the new report, “but we didn’t actually understand the basic biology of what regulates the leptin gene.”

The gene coding for the leptin hormone is regulated by adjacent DNA sequences and regulatory factors that turn the gene on in fat cells, and that also controls the amount of leptin being made. As they explored this process, Dallner and his colleagues zeroed in on one of these regulatory factors, called a long non-coding RNA, or lncRNA, which they identified together with colleagues at the University of Pennsylvania.

When the researchers engineered mice without this specific lncRNA and fed them a high-fat diet, the mice became obese, but their fat cells produced significantly lower amounts of leptin. This unusual finding suggested to the scientists that the leptin gene could not express normal levels of the hormone without the lncRNA to help it along.  In comparison, a group of unaltered control mice fed the same diet gained weight and produced the expected amount of leptin.

Moreover, when these low-leptin mice were treated with injections of leptin, they lost weight—in other words, the hormone essentially cured them. And that, the researchers say, raises the exciting possibility that some humans whose obesity is caused by a similar genetic anomaly could also lose weight with leptin therapy. (A pharmaceutical form of leptin was approved by the U.S. Food and Drug Administration in 2014.)

The fact that there may be obese people with such potentially leptin-curbing mutations was suggested by analyzing data from a large study, known as a genome-wide association study (GWAS), that included the complete genetic profiles of more than 46,000 people. Together with collaborators at the Mount Sinai School of Medicine, the Rockefeller team found that people with alterations in the human version of the lncRNA had lower leptin levels.

A potentially-treatable subtype of obesity

The number of obese people whose disease may be the result of the dysregulation of the leptin gene is not known, Dallner says, but there is reason to believe it could contribute to as many as 10 percent of all obesity cases.

For Dallner, who spent the better part of nine years working on the project, the heterogeneity of the obese population—the fact that different people are obese for different reasons—is the most interesting takeaway from the research. “The important part for me is that we set out to study the leptin gene in mice, and we ended up concluding that different mechanisms can cause obesity in humans,” he says.

Most obese people, he explains, become resistant to leptin (which would normally curb their appetites) because they have a lot of fat. Fat cells produce high amounts of leptin and, as the hormone accumulates, the brain appears to stop responding to it.

“But there is a large subset of humans who are obese and still are relatively low in leptin,” Dallner says. “We now think that many of them may have these or similar gene variants that affect the expression of the leptin gene. This gives them less leptin from an early age, making them a little bit hungrier than everyone else.”

These people remain sensitive to the hormone, however, and early clinical studies have shown that obese people with low leptin levels do in fact lose a significant amount of weight when treated with leptin. But the possible mechanisms underlying such cases were not understood, until now.

Dallner says that while the exact interplay between lncRNA and the leptin gene remains unclear, there is no doubt that the two are connected. “When we studied the lncRNA, we realized it was completely co-regulated with leptin. It’s expressed where leptin is expressed. When leptin is down the lncRNA is down, and vice versa. That was really the key moment, when I saw that and thought, ‘Something is really going on here.’”