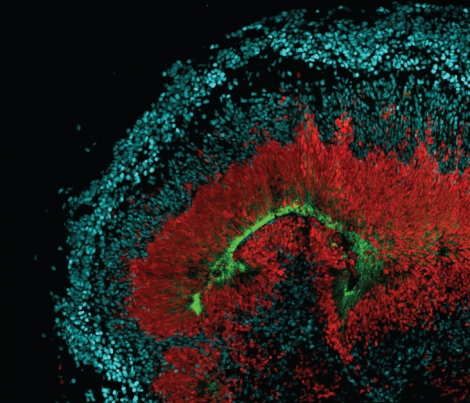 An image of tissue that’s grown in a dish shows radial glia stem cells that are red, neurons in blue and the AXL receptor in green. (Photo by Elizabeth DiLullo)

Strengthening the link between Zika virus and microcephaly, scientists at UC San Francisco have discovered that a protein the virus uses to infect skin cells and cause a rash is present also in stem cells of the developing human brain and retina.

The protein, which is known by the initials AXL, is a receptor that sits on the surface of cells and can operate as an entryway for viruses like Zika and dengue. Understanding this mechanism could lead to drugs that block Zika infection.

The Zika outbreak sweeping across the Americas has coincided with a surge of devastating birth defects, but links between these defects and infection by the virus have not been firmly established. Babies are being born with severe brain defects, including microcephaly, or underdeveloped brains; lissencephaly, or smooth brains that lack normal folds; and hydrocephaly, areas in the brain that have died and shrunk, increasing the space for cerebrospinal fluid. Some of these babies also have severe eye defects.

“This is precisely the kind of damage we would expect to see from something that was destroying neural and retinal stem cells during development,” said Arnold Kriegstein, MD, PhD, who directs the Eli and Edythe Broad Center of Regeneration Medicine and Stem Cell Research at UCSF. Kriegstein, the John Bowes distinguished professor in stem cell and tissue biology at UCSF and a member of the new Kavli Institute for Fundamental Neuroscience, also at UCSF, is the senior author of the paper, published online March 30 in Cell Stem Cell. 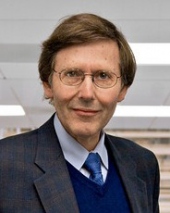 Until recently, Zika was thought to be relatively harmless, and there was only one published paper on the molecular mechanisms it used to infect cells. That paper listed four receptors, including AXL, the only one that could by itself enable infection.

Kriegstein’s lab had already done extensive work characterizing the cells in the developing human brain, and when Alex Pollen, PhD, a postdoctoral fellow, read the previous Zika paper, he recognized the gene and started looking for which cells in the developing brain produce the receptor, making them theoretically vulnerable to Zika infection.

“We compiled a list of the proteins we thought Zika and similar viruses like dengue were using to get inside of cells, and then we looked to see which of these proteins were abundantly present in the different cell types of the developing brain,” said Pollen, who did the work with Tomasz Nowakowski, PhD, and a UCSF graduate student Carmen Sandoval-Espinosa, BS, both in Kriegstein’s lab.

Using a technique called single-cell RNA-seq to determine which types of cells in the developing nervous system express the AXL gene, they found that radial glial cells, neural stem cells that are crucial to normal brain development, were programmed to make AXL receptors.

“In the rare cases of congenital microcephaly, these are the cells that die or differentiate prematurely, which is one of the reasons we became interested in the possible link,” Nowakowski said.

Two other more mature brain cell types, astrocytes and microglia, which can migrate in the brain, also express the AXL gene.

Scientists also found that AXL was being produced by the progenitor cells in the developing retina, which might explain the ocular defects seen in many cases of Zika infection, as well as in the cells lining blood vessels, hinting at a possible route the virus may take to enter the brain and eye.

To find out more, scientists stained brain and retinal tissue for AXL-positive cells. They found clusters near the lateral ventricle, outer sub-ventricular zone and meninges. These areas are bathed in cerebrospinal fluid, a likely source of viral particles. The staining also lit up tiny networks of brain capillaries, where the virus could be floating in blood. In the eye, the staining highlighted neural stem cells of the developing retina.

Once they knew that AXL was present in the right locations to cause the damage that had been observed in babies, two other lab members, Elizabeth Di Lullo, PhD, and Marina Bershteyn, PhD, looked to see if the “mini-brains” – cerebral organoids that scientists grow in a dish to study neurological diseases – were also programmed to express AXL and found that they were.

Scientists said they now have a testable model for infection in the brain that will spur work in many different areas. UCSF labs with expertise in virology, placental development, brain development, genomics and blood safety have already come together to expand on these pilot studies.

“If we can understand how Zika may be causing birth defects,” Kriegstein said, “we can start looking for compounds to protect pregnant women who become infected.”