As the market for liquid crystal displays and other electronics continues to drive up the price of indium — the material used to make the indium tin oxide (ITO) transparent electrodes in these devices — scientists have been searching for a less costly and more dynamic alternative, particularly for use in future flexible electronics.

Besides its high price, ITO has several drawbacks. It's brittle, making it impractical for use in flexible displays and solar cells, and there is a lack of availability of indium, which is found primarily in Asia. Further, the production of ITO films is relatively inefficient. 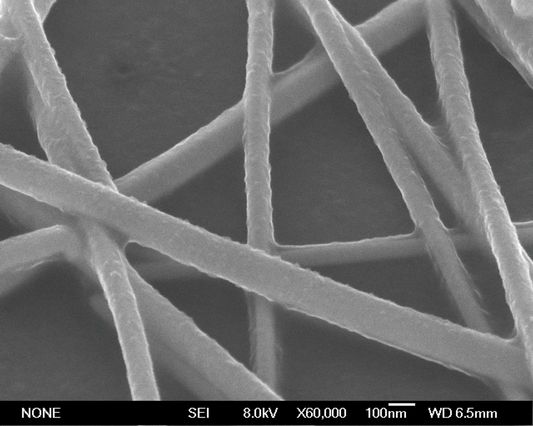 Now, researchers at UCLA report in the journal ACS Nano that they have developed a unique method for producing transparent electrodes that uses silver nanowires in combination with other nanomaterials. The new electrodes are flexible and highly conductive and overcome the limitations associated with ITO.

For some time, silver nanowire (AgNW) networks have been seen as promising candidates to replace ITO because they are flexible and each wire is highly conductive. But complicated treatments have often been required to fuse crossed AgNWs to achieve low resistance and good substrate adhesion. To address this, the UCLA researchers demonstrated that by fusing AgNWs with metal-oxide nanoparticles and organic polymers, they could efficiently produce highly transparent conductors.

"In this work, we demonstrate a simple and effective solution method to achieve highly conductive AgNW composite films with excellent optical transparency and mechanical properties," said Yang who also directs the Nano Renewable Energy Center at the CNSI. "This is by far the best solution: a processed, transparent electrode that is compatible with a wide variety of substrate choices."

Scientists can easily spray a surface with the nanowires to make a transparent mat, but the challenge is to make the silver nanowires adhere to the surface more securely without the use of extreme temperatures (200° C) or high pressures, steps that make the nanomaterials less compatible with the sensitive organic materials typically used to make flexible electronics.

First, researchers sprayed a solution of commercially available silver nanowires onto a surface. They then treated the nanowires with a solution of titanium dioxide nanoparticles to create a hybrid film. As the film dries, capillary forces pull the nanowires together, improving the film's conductivity. The scientists then coated the film with a layer of conductive polymer to increase the wires' adhesion to the surface.

The AgNW composite meshes are highly conductive, with excellent optical transparency and mechanical properties. The research team also built solar cells using the new electrodes and found that their performance was comparable to that of solar cells made with indium tin oxide.

The research received support from the Office of Naval Research and the Kavli Foundation.