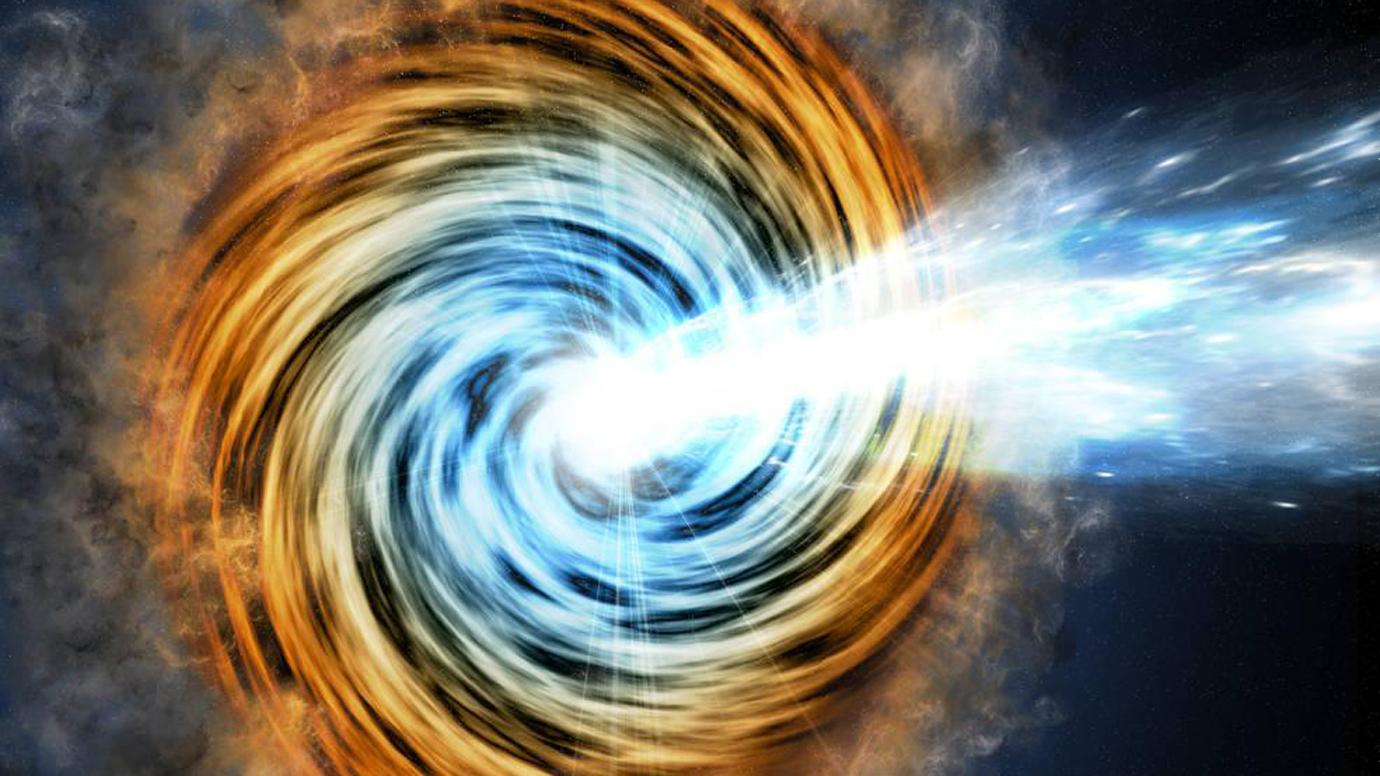 This artist's conception shows a blazar, the core of an active galaxy powered by a supermassive black hole. Scientists recently used VERITAS to detect gamma rays from the blazar TXS 0506+056, which is also thought to be a source of neutrinos. (Photo: Courtesy of M. Weiss/CfA)

The VERITAS Collaboration, including scientists at the University of Chicago, has confirmed the detection of very high-energy gamma rays from the vicinity of a supermassive black hole. While such detections are relatively commonplace for VERITAS, this black hole is potentially the first known astrophysical source of high-energy cosmic neutrinos—a type of ghostly subatomic particle.

On Sept. 22, 2017, the IceCube Neutrino Observatory, a cubic-kilometer neutrino telescope located at the South Pole, detected a high-energy neutrino of potential astrophysical origin. The observation of a single neutrino alone, however, is not sufficient for IceCube to claim the detection of a source. For that, scientists look for help from other instruments.

Very quickly after the detection by IceCube was announced, telescopes around the world swung into action to identify the source. One of these was the “Very Energetic Radiation Imaging Telescope Array System,” or VERITAS: a set of telescopes in southern Arizona that scans the skies for gamma ray activity.

These follow-up observations, from VERITAS and other gamma ray observatories, suggest that the source of the neutrino is a blazar—a supermassive black hole with powerful outflowing jets that can change dramatically in brightness over time.

This blazar, known as TXS 0506+056, is located at the center of a galaxy that is about four billion light years from Earth. 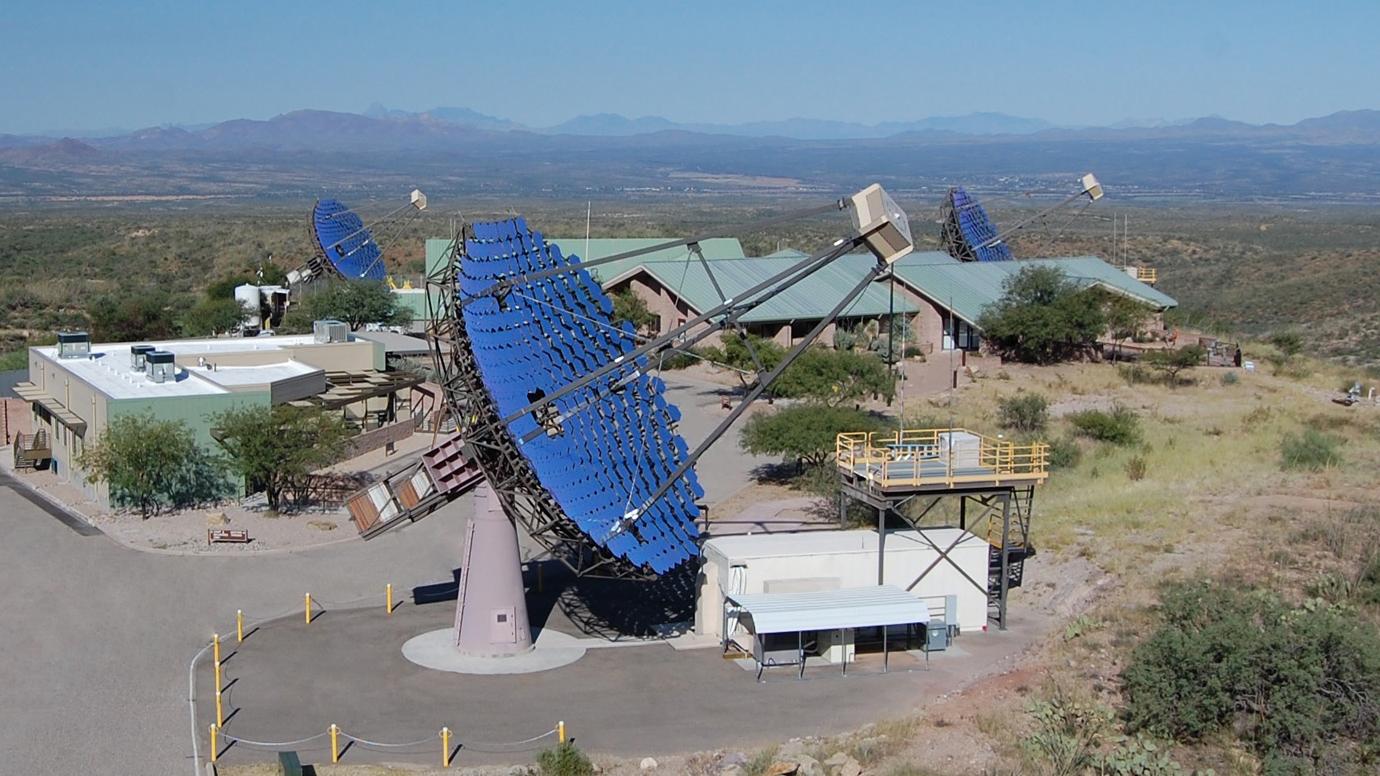 This photograph shows the 3 of the 4 telescopes of the Very Energetic Radiation Imaging Telescope Array System (VERITAS), located in southern Arizona. (Photo: Courtesy of VERITAS)

“This gamma-ray detection, coming as the result of an IceCube neutrino alert, is an excellent and exciting example of the power of what we call multi-messenger astrophysics—observations made through multiple types of signals in the universe,” said Scott Wakely, professor of physics at the University of Chicago and director of the Enrico Fermi Institute, and a member of the Kavli Institute for Cosmological Physics (KICP). “Chicago has played an important role in building and operating VERITAS from the very beginning. Results like this are why we got into this business.”

Wakely is the head of the UChicago VERITAS group, and served as deputy spokesperson of VERITAS from 2015 to 2018.

Initially, NASA’s Fermi Gamma-ray Space Telescope observed that TXS 0506+056 was several times brighter than usually seen in its all-sky monitoring. Eventually, the MAGIC observatory made a detection of much higher-energy gamma rays within two weeks of the neutrino detection, while VERITAS, H.E.S.S. and HAWC did not detect the blazar in any of their observations during the two weeks following the alert.

Given the importance of higher-energy gamma-ray detections in identifying the possible source of the neutrino, VERITAS continued to observe TXS 0506+056 over the following months, through February 2018, and revealed the source, though at a dimmer state than that detected by MAGIC. This detection confirms the variability of the source in gamma rays, a hallmark of blazars.

The detection of gamma rays coincident with neutrinos is tantalizing, since both particles must be produced in the generation of cosmic rays. Since they were first detected over 100 years ago, cosmic rays—highly energetic particles that continuously rain down on Earth from space—have posed an enduring mystery. What creates and launches these particles across such vast distances? Where do they come from?

“The potential connection between the neutrino event and TXS 0506+056 would shed new light on the acceleration mechanisms that take place at the core of these galaxies, and provide clues on the century-old question of the origin of cosmic rays,” said VERITAS Spokesperson Reshmi Mukherjee of Barnard College, Columbia University in New York, New York.

"The era of multi-messenger astrophysics is here," said NSF Director France Córdova. "Each messenger—from electromagnetic radiation, gravitational waves and now neutrinos—gives us a more complete understanding of the universe and important new insights into the most powerful objects and events in the sky. Such breakthroughs are only possible through a longterm commitment to fundamental research and investment in superb research facilities."

“The detection of very-high-energy gamma rays from TXS 0506+056 with VERITAS provides vital information to understand the powerful processes taking place in this and other potential neutrino sources,” said co-author Marcos Santander of the University of Alabama in Tuscaloosa, who led the study.

VERITAS is a ground-based facility located at the Fred Lawrence Whipple Observatory in southern Arizona. It consists of an array of four 12-meter optical telescopes that can detect gamma rays via the extremely brief flashes of blue “Cherenkov” light created when gamma rays are absorbed in the Earth’s atmosphere. The VERITAS Collaboration consists of about 80 scientists from 20 institutions in the United States, Canada, Germany and Ireland.