Hirosi Ooguri, the Kavli Professor of Theoretical Physics at the California Institute of Technology, is a co-recipient of the first ever Leonard Eisenbud Prize for Mathematics and Physics, awarded by the American Mathematical Society (AMS). The prize, created in 2006, has gone to Ooguri and coauthors Andrew Strominger and Cumrun Vafa of Harvard University for their paper "Black hole attractors and the topological string," published in 2004.

This work stems from concepts formulated by scientists Jacob Bekenstein and Stephen Hawking. Originally, scientists thought that a black hole must be simple in structure and somewhat dull as a phenomenon. In the 1970s, however, Bekenstein and Hawking proposed that a black hole would have entropy, and that its quantum configuration would have an exponentially large number of possibilities, much as there are a number of ways you can arrange the furniture in your bedroom. 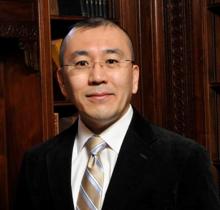 In what the AMS calls a "beautiful and highly unexpected proposal," Ooguri and his coauthors related the property of black holes to state-of-the-art mathematics in higher dimensions. A new geometric method in six dimensions called topological string theory, whose development has been inspired by superstring theory, turned out to be essential in explaining the origin of the black hole entropy.

"We had an answer, which was topological string theory," says Ooguri. But they did not know how it could be applied. "It turns out counting the states of black holes was the question we had been looking for. This work was the discovery of the question." Ooguri says that this prize is exciting not just for his work, but because it recognizes the connection between physics and mathematics. Ooguri had trouble understanding physics while in high school until he took calculus.

"Mathematics is a language, and we need that language to understand the physics of our universe," says Ooguri. Mathematics and physics complement each other. Discoveries in physics can catalyze developments in mathematics, and vice versa.

The $5,000 prize was awarded to Ooguri, Strominger, and Vafa on January 7, 2008, at the AMS meeting in San Diego, the largest annual gathering of mathematicians in the world.

David Eisenbud, a former president of the AMS, established the Leonard Eisenbud Prize for Mathematics and Physics in memory of his father, a mathematical physicist who died in 2004. The prize honors work that connects the two fields. The prize will be awarded every three years for a work published in the preceding six years.

John Schwarz, one of Ooguri's colleagues and the Brown Professor of Theoretical Physics at Caltech, says, "Hirosi Ooguri is one of the leading theoretical physicists in the world. Research on string theory and quantum field theory has had a profound impact on fundamental mathematics in recent times, and this is epitomized by Ooguri's contributions. I am delighted that he is receiving this richly deserved recognition."