(Originally published by the University of California, Los Angeles)

Leading nanoscientist Paul S. Weiss has been named director of the California NanoSystems Institute at UCLA, professor of chemistry and biochemistry, and holder of the Fred Kavli Chair in Nanosystems Sciences. 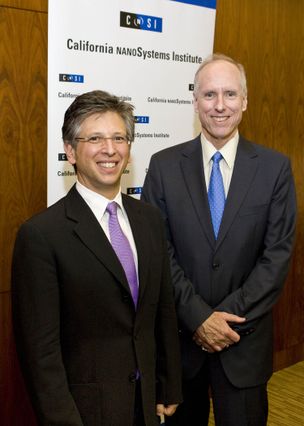 "Paul Weiss is an internationally renowned scientist, and we are fortunate that he is bringing his extraordinary talent and expertise to UCLA," said UCLA Chancellor Gene Block. "His experience with such a wide array of disciplines makes him the right leader for CNSI, where research involves more than 25 academic departments."

The CNSI is one of four institutes for science and innovation established within the University of California system in 2000 by the state of California. The institute fosters collaborations with industry to accelerate the commercialization of inventions and discoveries in nanotechnology.

Weiss and his research group focus on the atomic-scale chemical, physical, optical, mechanical and electronic properties of surfaces and supramolecular assemblies. He and his students have pioneered the development of new techniques to expand the applicability and chemical specificity of scanning probe microscopies and have applied these and other tools to the study of catalysis, self- and directed assembly, physical models of biological systems, and molecular and nanoscale electronics. They work to advance nanofabrication down to ever-smaller scales and greater chemical specificity in order to connect, operate and test molecular devices.

"Professor Weiss is a groundbreaking scientist, and we look forward to the key contributions that he and his wife, Professor Anne Andrews, will make to research and education here," said Joseph A. Rudnick, dean of the UCLA Division of Physical Sciences. "Our community will be significantly richer for having them join the UCLA faculty."

Anne Andrews has been appointed professor of psychiatry at UCLA.

Leonard H. Rome, who has served as the CNSI's interim director for the last two years, will resume his previous role as associate director. Rome is also senior associate dean for research at the David Geffen School of Medicine at UCLA and a professor of biological chemistry.

"CNSI has flourished under Lenny Rome's leadership," Block said. "He steered the institute through the grand opening of its state-of-the-art research facility in 2007 and the subsequent development of critical shared lab space. He also has been instrumental in expanding our international collaborations with top universities and institutes in Asia, Europe, and North and South America."

Rome was a key proponent of establishing CNSI bylaws, which have had a significant impact on the development of valuable standing committees to ensure that the institute's membership shares in the development of effective governing practices for the benefit of all. Rome has also played a significant role in developing relationships with industry, including the CNSI's founding partners, which include Abraxis BioScience, BASF, Hewlett-Packard and Intel.

"I have enjoyed serving as interim director of CNSI," Rome said. "Paul Weiss brings vast prestige and distinction to UCLA, and I am delighted to be able to hand over the leadership of the institute into his capable hands. Weiss is one of the world's preeminent nanoscience scholars and CNSI is very lucky, indeed. I look forward to working with him."

"The faculty in the department of chemistry and biochemistry are thrilled to have Paul Weiss join us as a member of our physical chemistry division," said Albert Courey, professor and chair of the UCLA Department of Chemistry and Biochemistry. "Weiss is a renowned leader in nanoscience, and he will add greatly to the international stature and visibility of our department and UCLA at large. Under Weiss' leadership, the American Chemical Society journal ACS Nano has developed into one of the leading nanoscience journals in the world."

"In addition to being an amazing research scientist, Professor Weiss is an outstanding educator, as evidenced by the multiple teaching awards he received as a member of the Penn State faculty," Courey added. "He is also a dedicated mentor to his Ph.D. students and will be a wonderful addition to our graduate program."

Weiss has published more than 200 papers and patents and has given more than 400 invited and plenary lectures. Among his honors are a National Science Foundation Presidential Young Investigator Award (1991–96), the B.F. Goodrich Collegiate Inventors Award (1994), an Alfred P. Sloan Foundation Fellowship (1995–97), the American Chemical Society Nobel Laureate Signature Award for Graduate Education in Chemistry (1996) and a John Simon Guggenheim Memorial Foundation Fellowship (1997). He is a fellow of the American Association for the Advancement of Science (2000), the American Physical Society (2002) and the American Vacuum Society (2007) and a senior member of the IEEE (2009). He received Penn State's Teaching Award from the Schreyer Honors College in 2004 and other teaching awards.

Weiss earned S.B. and S.M. degrees in chemistry from the Massachusetts Institute of Technology in 1980 and a Ph.D. in chemistry from the University of California, Berkeley, in 1986. He was a postdoctoral member of the technical staff at Bell Laboratories from 1986 to 1988 and a visiting scientist at the IBM Almaden Research Center from 1988 to 1989. Weiss began his academic career at Penn State as an assistant professor in 1989.

From 1996 to 1997, Weiss was a visiting professor in the department of molecular biotechnology at the University of Washington, and from 1998 to 2000, he served as visiting professor at Kyoto University's electronic science and engineering department and Venture Business Laboratory. He also served on the U.S. National Committee for the International Union of Pure and Applied Chemistry from 2000 to 2005.

Weiss was senior editor of the IEEE Electron Device Letters journal for molecular and organic electronics from 2005 to 2007 and since 2007 has served as founding editor-in-chief of the journal ACS Nano. Under his leadership, ACS Nano won the Association of American Publishers Award for Professional and Scholarly Excellence (PROSE) in 2008 for best new journal in science, technology and medicine.

Weiss' appointment as CNSI director is for a five-year term. He will assume his role as director this month.

The California NanoSystems Institute at UCLA

The California NanoSystems Institute at UCLA is an integrated research center operating jointly at UCLA and UC Santa Barbara whose mission is to foster interdisciplinary collaborations for discoveries in nanosystems and nanotechnology; train the next generation of scientists, educators and technology leaders; and facilitate partnerships with industry, fueling economic development and the social well-being of California, the United States and the world. The CNSI was established in 2000 with $100 million from the state of California and an additional $250 million in federal research grants and industry funding. At the institute, scientists in the areas of biology, chemistry, biochemistry, physics, mathematics, computational science and engineering are measuring, modifying and manipulating the building blocks of our world — atoms and molecules. These scientists benefit from an integrated laboratory culture enabling them to conduct dynamic research at the nanoscale, leading to significant breakthroughs in the areas of health, energy, the environment and information technology.