06/07/2018 - No More Sweet Tooth? Scientists Switch Off Pleasure from Food in Brains of Mice 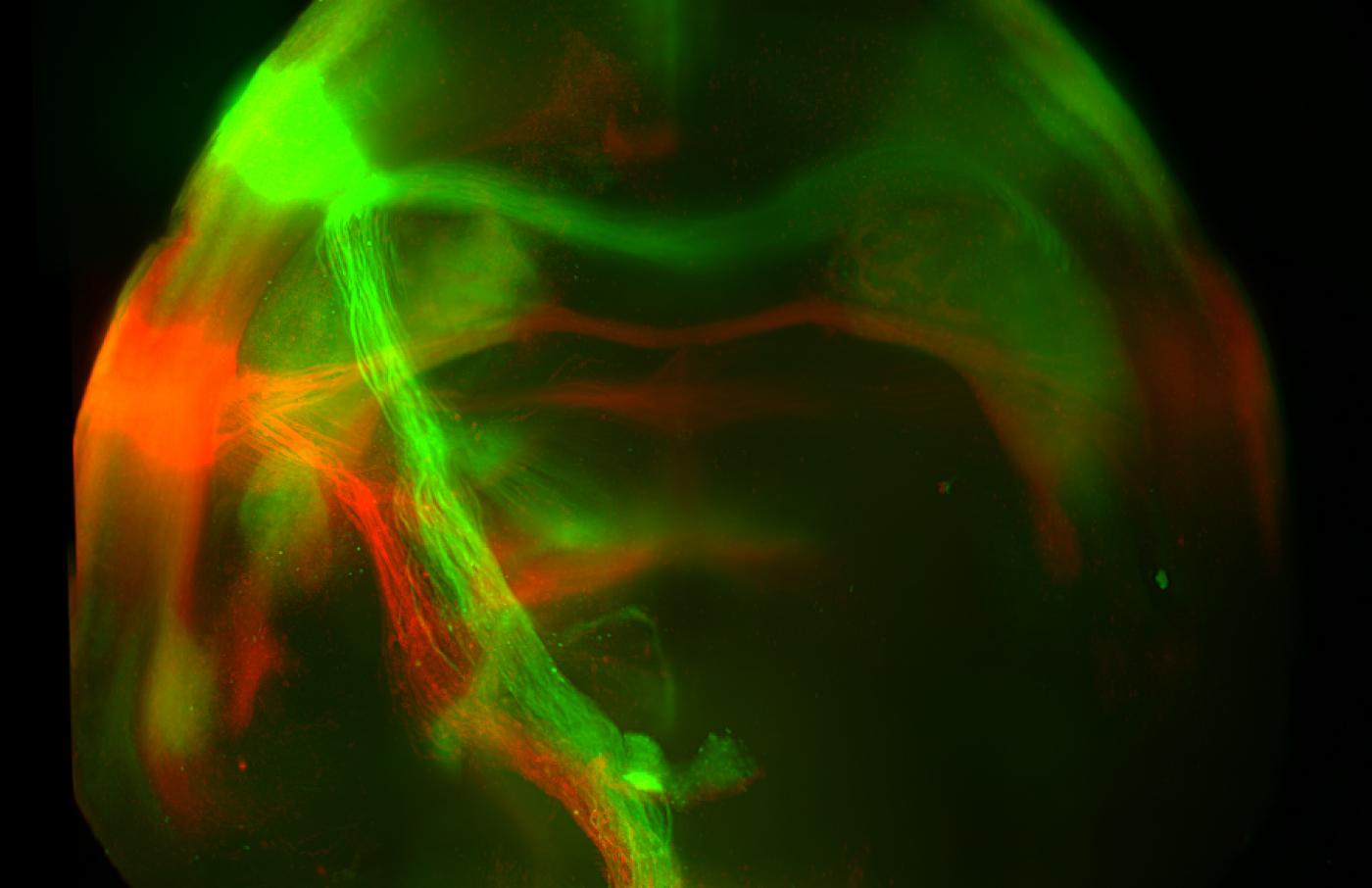 Neural projections from the sweet (green) and bitter (red) cortex terminate at distinct targets in the amygdala in the brains of mice (Credit: Li Wang/Zuker Lab/Columbia's Zuckerman Institute)

New research in mice has revealed that the brain’s underlying desire for sweet, and its distaste for bitter, can be erased by manipulating neurons in the amygdala, the emotion center of the brain.

The study showed that removing an animal’s capacity to crave or despise a taste had no impact on its ability to identify it. The findings suggest that the brain’s complex taste system — which produces an array of thoughts, memories and emotions when tasting food — are actually discrete units that can be individually isolated, modified or removed all together. The research points to new strategies for understanding and treating eating disorders including obesity and anorexia nervosa.

The research was published today in Nature.

“When our brain senses a taste it not only identifies its quality, it choreographs a wonderful symphony of neuronal signals that link that experience to its context, hedonic value, memories, emotions and the other senses, to produce a coherent response,” said Charles S. Zuker, PhD, a principal investigator at Columbia’s Mortimer B. Zuckerman Mind Brain Behavior Institute and the paper’s senior author.

Today’s study builds upon earlier work by Dr. Zuker and his team to map the brain’s taste system. Previously, the researchers revealed that when the tongue encounters one of the five tastes — sweet, bitter, salty, sour or umami — specialized cells on the tongue send signals to specialized regions of the brain so as to identify the taste, and trigger the appropriate actions and behaviors.

To shed light on that experience, the scientists focused on sweet and bitter taste and the amygdala, a brain region known to be important for making value judgments about sensory information. Previous research by Dr. Zuker, a professor of biochemistry and molecular biophysics and of neuroscience and a Howard Hughes Medical Institute Investigator at Columbia University Irving Medical Center, and others showed that the amygdala connects directly to the taste cortex.

“Our earlier work revealed a clear divide between the sweet and bitter regions of the taste cortex,” said Li Wang, PhD, a postdoctoral research scientist in the Zuker lab and the paper’s first author. “This new study showed that same division continued all the way into the amygdala. This segregation between sweet and bitter regions in both the taste cortex and amygdala meant we could independently manipulate these brain regions and monitor any resulting changes in behavior.”

"Our goal is to piece together how those regions add meaning and context to taste."

The scientists performed several experiments in which the sweet or bitter connections to the amygdala were artificially switched on, like flicking a series of light switches. When the sweet connections were turned on, the animals responded to water just as if it were sugar. And by manipulating the same types of connections, the researchers could even change the perceived quality of a taste, turning sweet into an aversive taste, or bitter into an attractive one.

In contrast, when the researchers instead turned off the amygdala connections but left the taste cortex untouched, the mice could still recognize and distinguish sweet from bitter, but now lacked the basic emotional reactions, like preference for sugar or aversion to bitter.

“It would be like taking a bite of your favorite chocolate cake but not deriving any enjoyment from doing so,” said Dr. Wang. “After a few bites, you may stop eating, whereas otherwise you would have scarfed it down.”

Usually, the identity of a food and the pleasure one feels when eating it are intertwined. But the researchers showed that these components can be isolated from each other, and then manipulated separately. This suggests that the amygdala could be a promising area of focus when looking for strategies to treat eating disorders.

In the immediate future, Drs. Zuker and Wang are investigating additional brain regions that serve critical roles in the taste system. For example, the taste cortex also links directly to regions involved in motor actions, learning and memory.

“Our goal is to piece together how those regions add meaning and context to taste,” said Dr. Wang. “We hope our investigations will help to decipher how the brain processes sensory information and brings richness to our sensory experiences.”

Zuker is also a member of the Kavli Institute for Brain Science at Columbia University.