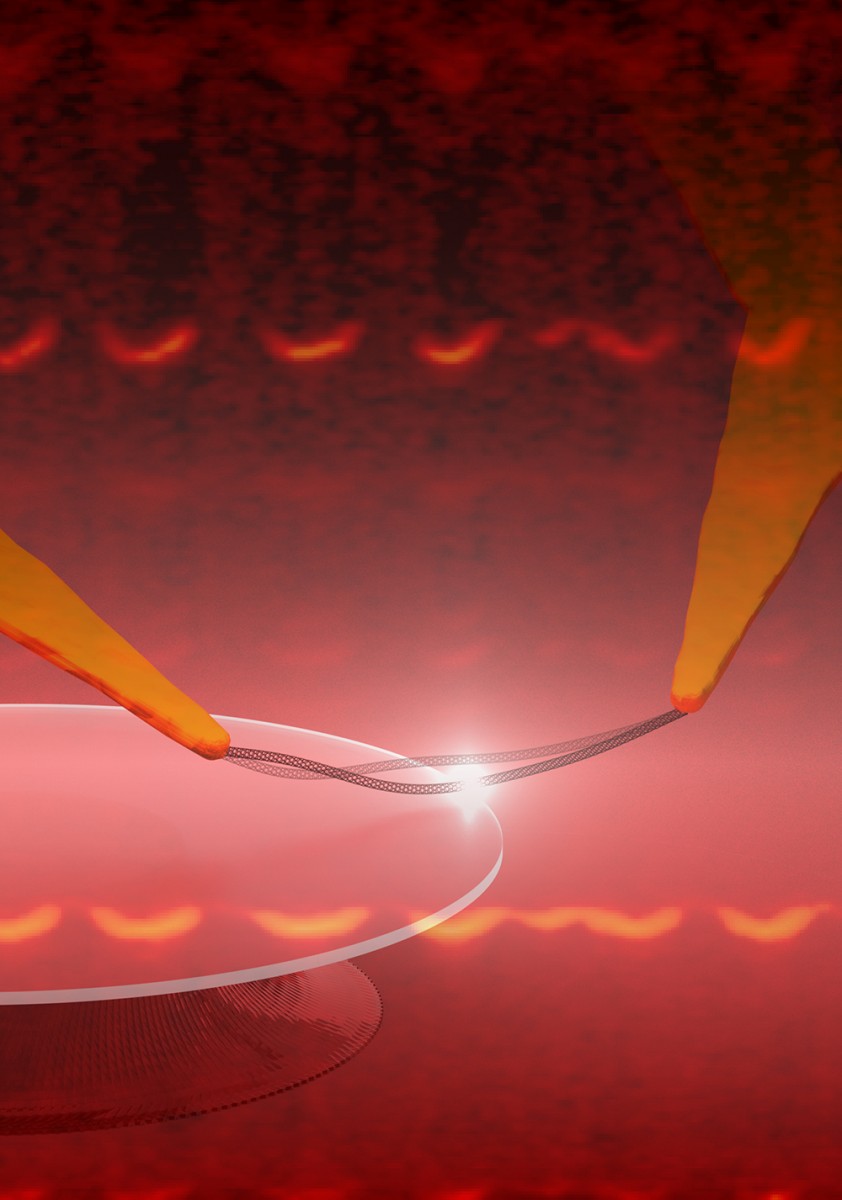 A nano-sized guitar string vibrates and crackles in an unexpectedly organized and intricate way, according to researchers who devised a way to listen to a nanoscale guitar for the first time – and then played the Cornell alma mater on it.

Cornell researchers created the first nanoguitar more than 20 years ago, but until now researchers could only assess its motion retroactively, using a method that averaged its vibrations over time.

In a new study, Paul McEuen, the John A. Newman Professor of Physical Science, and his colleagues developed a set of microtweezers capable of lifting the string, called a nanotube, and holding it near a device that can measure it. Their findings are described in “Real-Time Vibrations of a Carbon Nanotube,” published in Nature Jan. 21.

“We created a better technique for measuring, and it revealed a new world of complex and interesting behavior,” said McEuen, who is also director of the Kavli Institute at Cornell for Nanoscale Science. “It was one thing to do an average measurement and listen over long periods of time, but it was another thing to listen to it instantaneously and hear every small change in its vibration.”

McEuen collaborated on the work with Michal Lipson, formerly a professor of electrical engineering at Cornell and now at Columbia. First authors are Arthur W. Barnard, Ph.D. ’15, now at Stanford, and Mian Zhang, Ph.D. ’15, now at Harvard. Former Cornell postdoctoral associate Gustavo Wiederhecker, now of Universidade Estadual de Campinas in Brazil, also contributed to the study, which advances the understanding of how materials behave at the scale of a nanometer – one billionth of a meter.

“What happens when you make a guitar so small that it’s basically being battered around by intrinsic noisiness of the microscale world?” McEuen said. “It’s a fundamental curiosity question – how do these work? As we continue to make little mechanical systems that are smaller and smaller, how are they different from their macroscale counterparts?”

The nanotube is so small – the width of a strand of DNA – that it doesn’t absorb enough light to be measured with most methods. An optical resonator developed by Lipson’s lab can shoot light past a nano-sized object thousands of times, causing the object to absorb enough light to measure it. Until now, however, no way had been developed to use the optical resonator with the nanotube.

To solve this, McEuen and colleagues designed a set of electrically connected gold microtweezers that can pick up the nanotube and carry it to the optical resonator.

The vibration of the nanotube is far too high-pitched to be audible, but the researchers could hear its sound by slowing it down 500 to 1,000 times.

Using the old, retroactive method, researchers found that the nanotube’s tone was impure and jumbled – “like a tone that’s being played through a noisy radio,” McEuen said. Now that they could listen in real time, they learned that the crackling sounds were far more organized than they’d believed, consisting of vibrations transferring to other vibrations before returning to their original form.

“We thought that they were just very noisy, but what we found is that they’re really executing a complex dance,” he said. “There’s a lot of order going on in what people had previously thought of a disorderly system.”

In related unpublished work, the group also played the Cornell alma mater on the nanotube guitar by using the tweezers to stretch the nanotube to change its frequency of vibration, stretching and relaxing it to get each note right.

The work was supported by the National Science Foundation and the Cornell Center for Materials Research, and was performed in part at the Cornell NanoScale Science and Technology Facility.