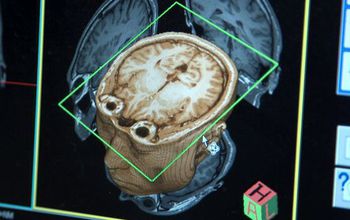 Researchers at Princeton University are studying how the brain determines what information is most important in every day scenes. Using functional magnetic resonance imaging, Sabine Kastner, a professor of neuroscience and psychology, is able to peek inside the brain and see what areas are active when a person sees a face, place or object. Credit: NBC Universal

A new video series released today takes viewers on a journey to unlock the mysteries of the brain and better understand how this complex organ functions. Produced by NBC Learn, the educational arm of NBCUniversal News Group, in partnership with the National Science Foundation (NSF), the series, "Mysteries of the Brain," covers the latest research in neuroscience and profiles the scientists who are leading it.

The eight-part video series draws on cutting-edge scientific research conducted in the White House BRAIN Initiative, which works in partnership with NSF, among other agencies, as well as other renowned scientific organizations. Narrated by NBC News Correspondent Tom Costello, each video segment aligns to state and national education standards.

"We're proud that NBC Learn is partnering with the National Science Foundation to produce an original video series that explores the latest advancements in brain research in an engaging and compelling way," said Soraya Gage, vice president and general manager of NBC Learn. "Through this partnership, we are using our digital platform and world-class production capabilities to increase awareness of the important work being done by scientists to chart unexplored territories of the brain."

Viewers will learn how the brain develops, controls emotions, creates memories and other important facts from these videos:

"Understanding the brain in all its amazing complexity is an enormous challenge for science," said NSF Director France Córdova. "For example, how does the brain interact with our physical and social environment? NSF is making strategic investments in brain science, and this may transform our view of how the brain develops and keeps developing. It may address how we relate to and interact with each other and our ever changing environment."

"Mysteries of the Brain" will be available through NBC affiliate stations, and can also be seen for free online at NBCLearn.com, NSF.gov/brain and Science360.gov.

Viewers can learn more and join the discussion by using the hashtag #ExplainTheBrain during a Twitter chat hosted by NBC Learn on Wednesday, June 10, from 6-7 p.m. ET., featuring some of the scientists profiled in the video series.

Lesson plans developed by the National Science Teachers Association for middle and high school students will be available later this summer.