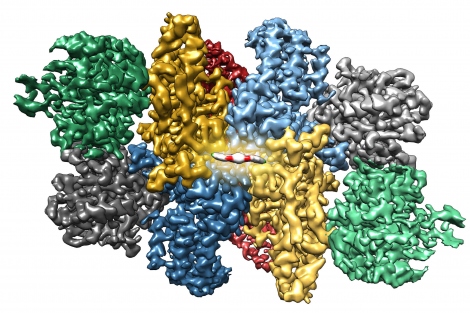 In a study published March 29, 2018 in Science, UCSF biochemist Peter Walter, PhD, and structural biologist Adam Frost, MD, PhD, showed that the drug, ISRIB (pronounced “iz-rib”), acts like a molecular staple, pinning together parts of a much larger protein involved in cellular stress.

The researchers hope the finding will help researchers tailor the drug for use in human clinical trials. “It’s a tremendous technical advance for pharmacology to be able to look in a microscope and see a drug bound to its target,” said Walter, a professor of biochemistry and biophysics and Howard Hughes Medical Institute (HHMI) investigator.

Every cell in our bodies responds to stressors such as viral infections, starvation, and injury by restricting the production of new proteins, which helps keep cells alive by buying them time to recover.

Traumatic brain injury, for example, persistently turns on the cellular stress response, and the resulting drop in protein production may slow critical cognitive processes such as learning and memory, which require brain cells to produce proteins that help create long-lasting connections in the brain.

Remarkably, a collaboration between Walter and McGill University biochemist Nahum Sonenberg, PhD, found in 2013 that ISRIB enhances learning and memory in mice. In 2017, follow-up work by Walter and UCSF neuroscientist Susanna Rosi, PhD, a professor of physical therapy and rehabilitation sciences and of neurological surgery, showed that ISRIB even restored long-term memory in mice with traumatic brain injury long after the injuries occurred, an effect neurologists had previously considered impossible. 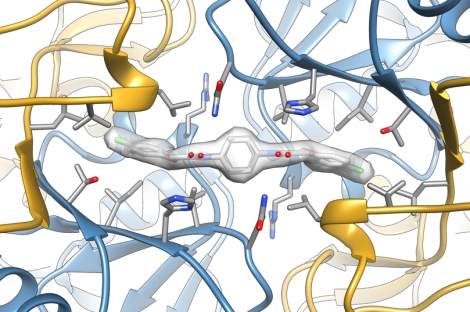 To better understand how ISRIB activates and stabilizes eIF2B, Walter and his colleagues turned to Frost, a leading expert in ultra–high resolution cryo-electron microscopy, to obtain detailed 3D images of ISRIB bound to ten eIF2B components.

The researchers determined that the propeller-shaped ISRIB molecule fits snugly into a pocket deep inside eIF2B where it holds together two identical subcomplexes of the larger protein. The researchers demonstrated that this stabilizes elF2B and helps it maintain protein production in the face of cellular stress.

"Seeing this drug bound to its intended human protein target at atomic resolution was mind-blowing," said Frost, an assistant professor of biochemistry and biophysics at UCSF. "The atomic-level structure also revealed a fascinating symmetry mismatch between the drug and the target, which could inspire new strategies for future drug designs."

But Walter envisions future iterations of the drug being used to combat many different diseases linked to cellular stress, including cancer.

“This work shows how basic research can become a foundation for important clinical discoveries,” Walter said. “Our lab is entirely focused on understanding the fundamentals of how cells work. The connection to neurology and other diseases is entirely and delightfully serendipitous.”

For more information, read the press release from the Howard Hughes Medical Institute.