When you pick up the newest material in Julia Greer's office, it takes a second for your mind to adjust. Despite its looks, the little brick of metal weighs next to nothing.

"We're entering a new era of materials science where material properties are determined not only by the microscopic makeup of the material but also by the architecture of the constituents," Greer says.Greer, a member of the Kavli Nanoscience Institute at the California Institute of Technology, is part of a team of researchers from Caltech, HRL Laboratories, LLC, and the University of California, Irvine, who have developed the world’s lightest solid material, with a density of just 0.9 milligrams per cubic centimeter, or approximately 100 times lighter than Styrofoam™. Though the material is ultra-low in density, it has incredible strength and absorbs energy well, making it potentially useful for applications ranging from battery electrodes to protective shielding.

The new material, called a micro-lattice, relies, appropriately, on a lattice architecture: tiny hollow tubes made of nickel-phosphorous are angled to connect at nodes, forming repeating, asterisklike unit cells in three dimensions. Everything between the tubes is open air. In fact, the structure consists of 99.99% open volume. Tobias Schaedler, a research staff scientist at HRL Laboratories, LLC, and lead author on the report described it as "a lattice of interconnected hollow tubes with a wall thickness of 100 nanometers, 1,000 times thinner than a human hair."

The material takes advantage of a hierarchical design: the wall thickness can be measured in nanometers, the diameter of each tube can be measured in microns, each tube is millimeters in length, and the entire micro-lattice material can be measured in centimeters (but might one day be made meters in length). Just as with large-scale structures, such as the Eiffel Tower, where order and hierarchy can lead to more efficient use of materials and improved properties, the same can be achieved by ordering materials on a tiny scale. In addition to its ultra-low density, the micro-lattice's hierarchical architecture allows it to recover almost completely from loads that compress it by as much as 50 percent, making it excellent at absorbing energy. 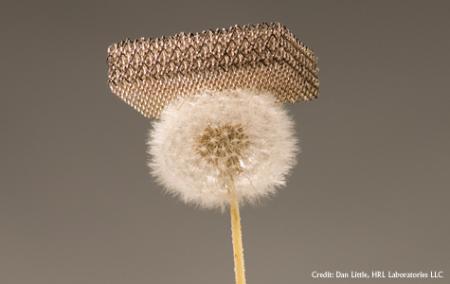 "The emergence of the unique properties of these ultra-light micro-lattice structures is due, in part, to the different mechanical behavior that emerges in nano-sized solids, which is the focus of my research," Greer says. Her team uses a machine called a SEMentor, which is both an electron microscope and a nanoindenter, to visualize the deformation of nano-sized structures and to concurrently measure mechanical properties, such as how much force it takes to break a material, how much energy it can absorb, and how much it stretches. The extremely small wall thickness-to-diameter ratio in the micro-lattice material makes the individual tubes ductile (i.e. they do not fail catastrophically); at higher aspect ratios, the material simply collapses and cannot recover.

The research appears in the November 18 issue of Science. Additional coauthors on the report, "Ultralight Metallic Lattices," include Caltech postdoctoral scholar Jane Lian, as well as Alan Jacobsen, Adam Sorensen, and Bill Carter from HRL Laboratories, and Anna Torrents and Lorenzo Valdevit from the University of California, Irvine. The research was funded by the Defense Advanced Research Projects Agency.