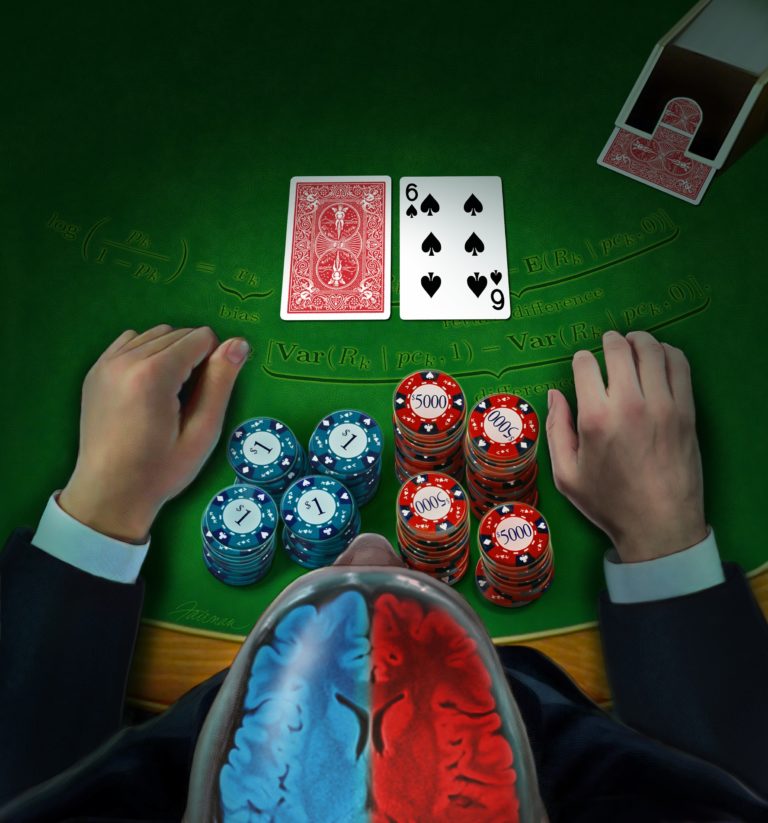 Picture yourself at a Las Vegas poker table, holding a bad hand – one with a very low chance of winning. Even so, the sight of the large stack of chips that piled up during a recent lucky streak nudges you to place a large bet anyway.

Why do people make high-risk decisions – not only in casinos, but also in other aspects of their lives – even when they know the odds are stacked against them?

A team led by a Johns Hopkins biomedical engineer has found that the decision to “up the ante” even in the face of long odds is the result of an internal bias that adds up over time and involves a “push-pull” dynamic between the brain’s two hemispheres.
Whether you are suffering from a losing streak or riding a wave of wins, your cumulative feelings from each preceding hand all contribute to this nudge factor, they say. A paper on the study is to be published online the week of Jan. 7 by the journal Proceedings of the National Academy of Sciences.

Insights from the research have the potential to shed light on how soldiers in high-risk combat situations make decisions and to facilitate more effective brain training to change or “rewire” long-term behavior or habits, the researchers suggest.

“What we learned is that there is a bias that develops over time that may make people view risk differently,” said senior author Sridevi Sarma, a biomedical engineering professor at the Johns Hopkins University Whiting School of Engineering and member of its Institute for Computational Medicine. Pierre Sacré, a postdoctoral fellow at Johns Hopkins, co-led the study.

Sarma’s group sought to understand why people tend to take risks even when the odds are against them or avoid risk even when the odds are favorable. They also wanted to learn where in the human brain such behavior originates. They asked patients at the Cleveland Clinic’s Epilepsy Monitoring Unit to play a simple card game involving risk-taking.

The patients had undergone stereoelectroencephalography, a procedure in which doctors implanted multiple deep-seated electrodes in their brains; that was designed to allow the doctors to locate the source of seizures for future surgical treatment. Each of these depth electrodes has 10 to 16 channels that record voltage signals from the neurons surrounding it. The electrodes also allowed Sarma and her team an intimate look at the patients’ brains in real time, as they made decisions while gambling against a computer in a card game.

The game was simple: The computer had an infinite deck of cards with only five different values – 2, 4, 6, 8, and 10 – each of which was equally likely to be dealt. Following every round, the cards went back into the deck, leaving odds unchanged.

When dealt a 2, 4, 8, or 10, participants bet quickly and instinctively, the research team found. When dealt a 6, however, they wavered and were nudged into betting higher or lower depending on their bias – even though the chances of picking a higher or lower card were the same as before. In other words, participants’ betting behavior was based on how they fared on past bets even though those results had no bearing on the outcome of the new bets.

On examining neural signals recorded during all four stages of the game, Sarma’s team found a predominance of high-frequency gamma brain waves. They were even able to localize these signals to particular structures in the brain. It turns out that these regions – excluding any implicated in drug-resistant epilepsy – were associated positively or negatively with risk-taking behavior.

To assess that internal bias, the researchers developed a mathematical equation that successfully calculated each patient’s bias using only their past wagers.

“We found that if you actually solve for what this looks like over time, the players are accumulating all the past card values and all the past outcomes, but with a fading memory,” Sarma says. “In other words, what happened most recently weighs on a person more than older events do. This means that based on the history of a participant’s bets, we can predict how that person is feeling as they gamble.”

The National Science Foundation and the Kavli Neuroscience Discovery Institute at Johns Hopkins University paid for the study.