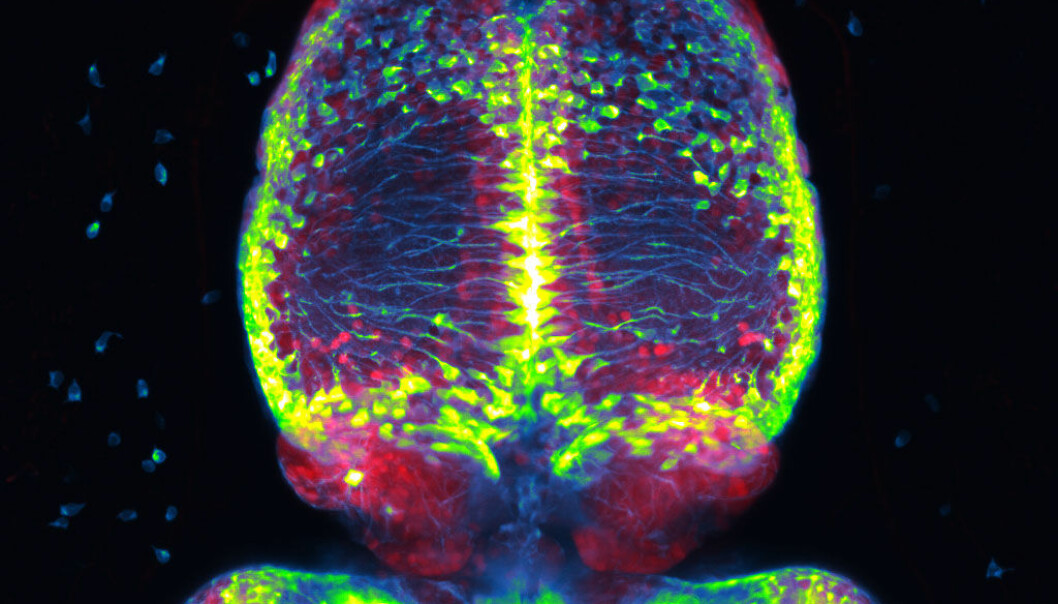 The picture shows parts of a zebrafish brain, including a part called the habenula. The green dots are parent cells, which can divide into new brain cells. Zebrafish brains have a lot of these cells, a feature that gives these animals a great ability to repair damage to the brain. (Photo: Stephanie Fore, Kavli Institute for Systems Neuroscience)​

​​This month’s roundup of news from the Kavli Neuroscience Institutes highlights how researchers are going big, expanding their ideas, models and cells(!) as they strive to understand the brain. Take “The Mind of a Mouse,” a new commentary by 25 neuroscientists who are thinking big about the field of connectomics. They lay out a proposal to map all the connections in the mouse brain—a feat that would require 1 trillion terabytes of data! Also, in a big study on working memory, Rockefeller’s Priya Rajasethupathy fundamentally expands the model of how the brain’s mental sketchpad works. And, finally, Yale’s Joerg Bewersdorf offers researchers a new way to peer into cells and explore their wonders: His new “pan-expansion microscopy” technique involves physically inflating cells 20-fold. Read on!

A new study expands a long-standing model of working memory, a mental sketch pad that allows us to briefly hold information in our minds in the absence of sensory stimuli. The classic view is that working memory relies on the persistent activity of neurons in the prefrontal cortex. But the new study, published recently in Cell by neuroscientist Priya Rajasethupathy, PhD, shows that the thalamus is also critical. Rajasethupathy and her colleagues tested the performance of 200 different mice strains on a working memory task and, based on the animals’ performance, pinpointed a single gene that dramatically altered their performance. The researchers also traced the expression of that gene, which codes for a signaling receptor, to neurons in the thalamus, a midbrain structure with connections to the prefrontal cortex. Additional experiments showed that the receptor helps link brain activity in the thalamus and prefrontal cortex during working memory tasks. Rajasethupathy is a member of the Kavli Neural Systems Institute at The Rockefeller University.

Mindful eating takes on new meaning thanks to research from the lab of Daniel Mucida, PhD, also at the Kavli Neural Systems Institute at The Rockefeller University. In a study published this month in Science, Mucida’s team shows that microbes living in the gut modulate appetite and blood sugar levels via a subset of enteric neurons. “We know that microbes in the gut can produce metabolites that mimic neurotransmitters and are detected by enteric neurons. Now we are beginning to find direct connections between microbial activity and host behavior, such as eating. It’s a remarkable role for these organisms,” Mucida said in a news article.

MC Hammer—yes, the rapper of “U Can’t Touch This” fame and a huge science fan—tweeted about a commentary in Cell discussing the potential benefits of a large-scale effort to create a mouse brain connectome—and what it would take to get there. The piece was penned by Larry Abbott, PhD, a member of Columbia’s Kavli Institute for Brain Science, the Salk Institute’s Edward Callaway, PhD, co-director of the Kavli Institute for Brain and Mind, and 23 other neuroscientists.

At the Kavli Institute for Systems Neuroscience at the Norwegian University of Science and Technology, Emre Yaksi, PhD, studies zebrafish embryos, which grow from an egg to active larva in just 72 hours, to understand how the nervous system develops and functions. Why? In addition to the speed of development, “the advantage is that these creatures aren’t hiding inside a uterus. And that they’re transparent,” he said in a recent article about a new paper published in Science Advances. The study specifically focused on the development of the habenula, a brain structure found in both fish and humans that is involved in learning and social behaviors, and the dramatic changes it undergoes in such a short period of time. Emre and his team found that habenula neurons develop sequentially and that clusters of cells born at different times display distinct functional properties, strongly connecting neuronal birthdate to function.

A UCSF team led by Karunesh Ganguly, MD/PhD, has developed a brain-computer interface (BCI) that doesn’t require daily retraining. It’s a significant advance for the researchers whose ultimate goal is a brain-controlled prosthetic limb. In a study published in Nature Biotechnology, Ganguly and his team tested a device that reads brain activity and allows a person with paralysis in all four limbs to control a cursor on a computer screen. The participant was able to train the BCI to a high level of performance and then continue using it daily without the need for it to be reset or recalibrated. The study reports that the BCI performed well for 44 days. The team’s achievement hinged on a new machine-learning algorithm as well as the engineering of the device itself, which could stably record signals from the brain’s surface over long periods of time. “We see this as trying to build a partnership between two learning systems—brain and computer—that ultimately lets the artificial interface become an extension of the user, like their own hand or arm,” said Ganguly in a news article. He is a member of the Kavli Institute for Fundamental Neuroscience.

Yale physicist Joerg Bewerdorf, PhD, has developed “pan-expansion microscopy,” a new technique that uses standard light microscopy to reveal the nanoscale world inside cells. The technique rivals the resolution of an electron microscope, allowing scientists to visualize cellular structures like nuclear pores and centrosomes, but is less costly and technically demanding. He described the tool in a paper published in Nature Communications. Bewersdorf is a member of Yale’s Kavli Institute for Neuroscience.