Gamma-ray bursts, the most powerful explosions in the universe since the Big Bang, are thought to last mere seconds or a few short minutes. But new data from the Fermi Gamma-ray Space Telescope show at least some of them have much more staying power.

In March, FGST's Large Area Telescope, or LAT—an incredibly sensitive gamma-ray and particle detector assembled at SLAC—spotted high-energy gamma rays from two separate bursts lasting many minutes after they occurred. Such burst durations have been observed only once before. In 1994, NASA's EGRET instrument picked up gamma rays 1.5 hours after a blast. 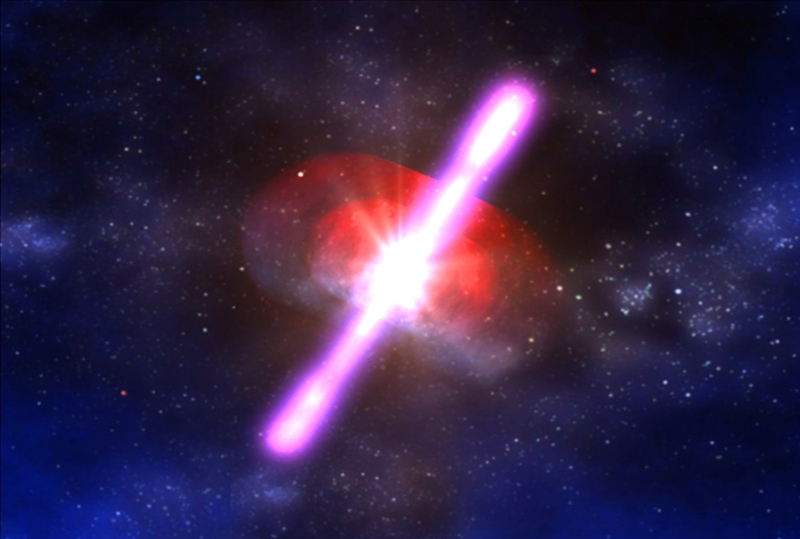 "With only one observation, you never know how often something happens," said Roger Blandford, director of Stanford's Kavli Institute for Particle Astrophysics and Cosmology. "Now these delayed gamma rays are beginning to look like a common phenomenon."

Gamma-ray bursts are mysterious. Astronomers have proposed that they occur when massive stars run out of nuclear fuel and collapse into black holes, releasing intense jets of radiation. The collision of two neutron stars orbiting in a binary system is another possible source. FGST's observations could help scientists tease out the actual cause or causes.

The new data set is "an important constraint on the nature of these explosions," Blandford said. "The source of bursts such as these must remain active for a relatively long time. This means that certain explanations are not viable."

Neutron-star collisions may fall into this category, according to Blandford. Scientists believe that when these collapsed stellar remnants smash into each other, it's all over within a few minutes. Gamma-ray bursts could result, but they wouldn't last very long.

One potential burst source that would fit FGST's data: the formation of a black hole with an accretion disc of gas and dust spinning around it. As the black hole's immense gravity pulls this material in and compresses it, high-energy electromagnetic radiation such as gamma rays could be emitted.

"Accretion discs could provide fuel for an hour or more," Blandford said.

The new bursts occurred March 23 and March 28. FGST picked them up with the LAT and its other instrument, the Gamma-ray Burst Monitor. The LAT then tracked the blasts long after the initial fireworks ended—the first time the instrument was directed to stare rather than scan in response to an event.

"We got those things right in our sights and stared at them for hours," said SLAC physicist Jim Chiang, who helped analyze the data. "We knew we had to confirm the EGRET event. We had to chase that down."

The LAT's measurements, announced over the weekend at the American Physical Society meeting in Denver, indicated that the first burst, named GRB090323, probably lasted at least half an hour. The second, GRB090328A, continued for 15 minutes or more.

Finding radiation emanating from a burst for so long is not new. But all previous instruments—with the exception of EGRET—picked up "afterglows" of lower-energy frequencies, such as X-rays and ultraviolet light.

All gamma-ray bursts recorded thus far have occurred very far away, outside our galaxy. The two long-lasting blasts are no different. GRB090323 had a measured redshift of 3.57, which corresponds to a distance of 11.9 billion light years. GRB090328A's redshift was 0.736, translating to 6.5 billion light years away. That's just as well: a nearby burst aimed directly at Earth could cause mass extinctions.

These findings are the latest in a growing list of accomplishments for FGST. Since its launch last June, the telescope has already documented the most powerful gamma-ray burst ever seen and picked up a possible signal of dark-matter annihilations. FGST will continue to sweep the gamma-ray sky through at least 2013, searching for signs of dark matter and clues about the most extreme events in the universe.