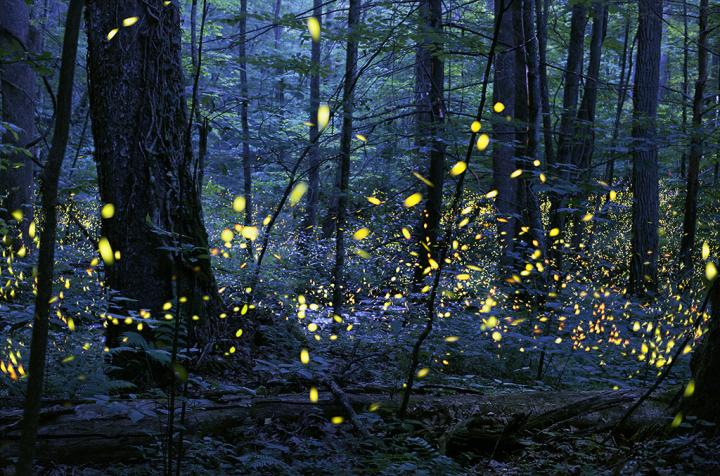 Fireflies, heart cells, clocks, and power grids all do it--they can spontaneously sync up, sending signals out in unison. For centuries, scientists have been perplexed by this self-organizing behavior, coming up with theories and experiments that make up the science of sync. But despite progress being made in the field, mysteries still persist--in particular how networks of completely identical elements can fall out of sync.

Now, in a new study in the March 8 issue of the journal Science, Caltech researchers have shown experimentally how a simple network of identical synchronized nanomachines can give rise to out-of-sync, complex states. Imagine a line of Rockette dancers: When they are all kicking at the same time, they are in sync. One of the complex states observed to arise from the simple network would be akin to the Rockette dancers kicking their legs "out of phase" with each other, where every other dancer is kicking a leg up, while the dancers in between have just finished a kick.

The findings experimentally demonstrate that even simple networks can lead to complexity, and this knowledge, in turn, may ultimately lead to new tools for controlling those networks. For example, by better understanding how heart cells or power grids display complexity in seemingly uniform networks, researchers may be able to develop new tools for pushing those networks back into rhythm.

"We want to learn how we can just tickle, or gently push, a system in the right direction to set it back into a synced state," says Michael L. Roukes, the Frank J. Roshek Professor of Physics, Applied Physics, and Bioengineering at Caltech, and principal investigator of the new Science study. "This could perhaps engender a form of new, less harsh defibrillators, for example, for shocking the heart back into rhythm."

Synchronized oscillations were first noted as far back as the 1600s, when the Dutch scientist Christiaan Huygens, known for discovering the Saturnian moon Titan, noted that two pendulum clocks hung from a common support would eventually come to tick in unison. Through the centuries, mathematicians and other scientists have come up with various ways to explain the strange phenomenon, seen also in heart and brain cells, fireflies, clouds of cold atoms, the circadian rhythms of animals, and many other systems.

In essence, these networks consist of two or more oscillators (the nodes of the network), which have the ability to tick on their own, sending out repeated signals. The nodes must also be connected in some way to each other (through the network edges), so that they can communicate and send out messages about their various states.

A network of nano-oscillators is shown in this animation, where the arrows represent the oscillators' phases and amplitudes. Networks like this will spontaneously sync up, as well as fall out of sync into complex patterns. In this complex state, every oscillator is in sync with its neighbor's neighbor but not with its neighbor itself. The in-sync neighbors' neighbors are always in opposite orientations. Meanwhile, neighboring oscillators rotate at different speeds and thus can be in and out of phase with each other. (Image: Roukes group/Caltech)

But it has also been observed since the early 2000s that these networks, even when consisting of identical oscillators, can spontaneously flip out of sync and evolve into complex patterns. To better understand what is going on, Roukes and colleagues began to develop networks of oscillating nanomechanical devices. They started by just connecting two, and now, in the new study, have developed an interconnected system of eight.

To the team's surprise, the eight-node system spontaneously evolved into various exotic, complex states. "This is the first experimental demonstration that these many distinct, complex states can occur in the same simple system," says co-author James Crutchfield, a visiting associate in physics at Caltech and a professor of physics at UC Davis.

To return to the Rockettes metaphor, another example of one of these complex states would be if every other dancer were kicking a leg up, while the dancers in between were doing something entirely different like waving their hats. And the examples get even more nuanced than this; with pairs of dancers doing the same movements between pairs of other dances doing something different.

"The perplexing feature of these particular states is that the Rockettes in our metaphor can only see their nearest neighbor, yet manage to be coordinating with their neighbor's neighbor," says lead author Matthew Matheny, a research scientist at Caltech and member of the Kavli Nanoscience Institute.

"We didn't know what we were going to see," says Matheny. "But what these experiments are telling us is that you can get complexity out of a very simple system. This was something that was hinted at before but not shown experimentally until now."

"These exotic states arising from a simple system are what we call emergent," says Roukes. "The whole is greater than the sum of the parts."

The researchers hope to continue to build increasingly complex networks and observe what happens when more than eight nodes are connected. They say that the more they can understand about how the networks evolve over time, the more they can precisely control them in useful ways. And eventually they may even be able to apply what they are learning to model and better understand the human brain--one of the most complex networks that we know of, with not just eight nodes but 200 billion neurons connected to each other typically by thousands of synaptic edges.

"Decades after the first theories of the science of sync, and we are just finally beginning to understand what's going on," says Roukes. "It's going to take quite a while before we understand the unbelievably complex network of our brain."

The new Science study, titled, "Exotic States in a Simple Network of Nanoelectromechanical Oscillators," was funded by the U.S. Army and the Intel Corporation. Other Caltech authors include Warren Fon, a research engineer; Jarvis Li, a graduate student; and M.C. Cross, a professor of theoretical physics, emeritus.