In all directions of the sky, cosmic rays rocket through space with incredible speed. These “rays”—which mostly consist of protons—are some of the most energetic particles in the universe. For nearly 100 years, they have also been some of the most enigmatic. Now, a new result from the Fermi Gamma-ray Space Telescope’s Large Area Telescope collaboration offers insight into how, exactly, the universe accelerates these particles to such high energies. The high-energy cosmic rays appear to be coming from supernova remnants, the dying remains of exploded stars; the new result reveals the spatial distribution of this emission in one particular supernova remnant. 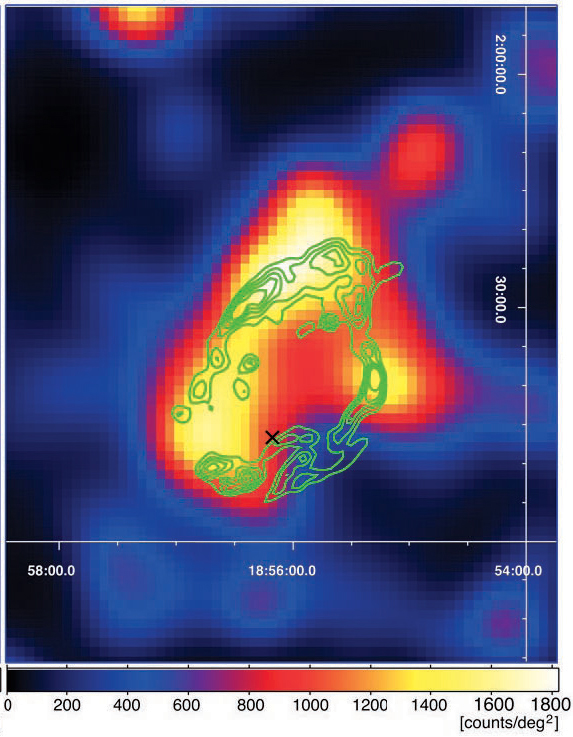 Supernova remnant W44 as imaged by the Fermi telescope's Large Area Telescope and enhanced with a restoration technique. The green contours indicate the remnant seen with infrared light. (Image courtesy of NASA/DOE/LAT collaboration.)

The acceleration of cosmic rays is a long-standing cosmic mystery. Cosmic rays were first recognized in 1912, but it wasn’t until 1949 that Italian physicist Enrico Fermi first proposed the mechanism behind their acceleration. In the following decades, Fermi’s ideas were developed further by researchers, including Roger Blandford, director of the Kavli Institute for Particle Astrophysics and Cosmology, jointly located at SLAC National Accelerator Laboratory and Stanford University.

The most likely source, researchers determined, is supernova remnants, which result from tremendous stellar explosions. As a star explodes, its material plows into the gas between the stars, compressing it and forming shock waves.  Those shocks are the most likely sites of very efficient acceleration of charged particles called cosmic rays. “But still observations had yet to pinpoint where the particle acceleration really occurs,” said KIPAC Panofsky Fellow Yasunobu Uchiyama.

In a paper published today in Science, the Large Area Telescope collaboration, led by KIPAC researchers Takaaki Tanaka, Uchiyama, and Hiroyasu Tajima, released the first image of a supernova remnant in the giga-electronvolt energy range (about 200 million times the energy of visible light). By revealing the spatial distribution of cosmic rays in the remnant, this result is a significant step toward definitively determining how cosmic rays are accelerated in supernova remnants.

“With Fermi, we finally have succeeded in getting information about spatial distribution from a supernova remnant in this energy band,” said Tanaka. “This band is quite important for the study of particle acceleration in supernova remnants including determining the origin of cosmic rays.”

To reveal this spatial distribution, the LAT observed supernova remnant W44 not in cosmic rays, but in gamma rays. Very soon after cosmic rays are accelerated to high energies in the supernova remnant, they interact with the diffuse gas that pervades the space between stars. Most of these cosmic rays are high-energy protons that collide with hydrogen atoms in this interstellar medium, producing particles called neutral pions that immediately decay into gamma rays. The researchers deduced that the gamma rays detected by the LAT were very likely created in this process based on the observed gamma-ray spectrum.

“This paper proves Fermi capable of determining the origin of gamma rays,” said Tanaka. As the LAT gathers more data, he continued, the certainty will increase.

“In this paper we cannot declare for certain that we’ve finally seen the signature of these protons,” said Uchiyama. “There is another possibility we need to rule out.  But if we can prove this connection, it will be a huge breakthrough. Researchers have been chasing this for nearly 100 years, ever since cosmic rays were first understood.”