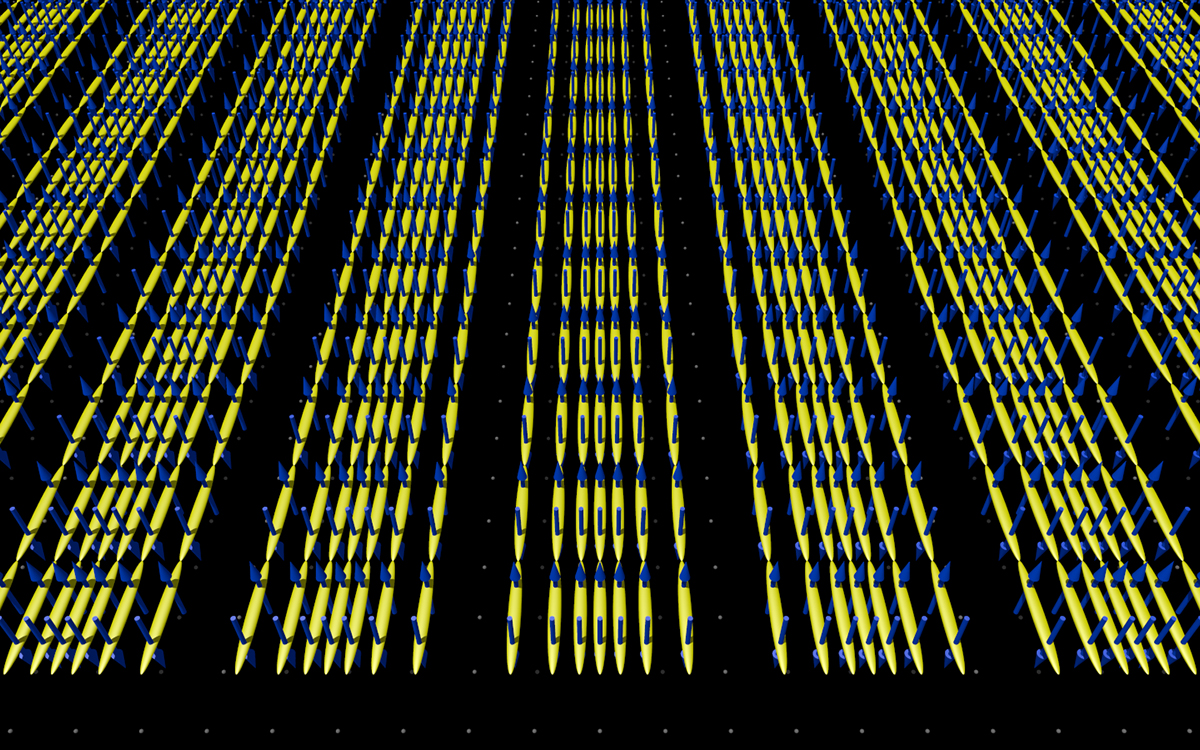 Graphic depiction of a periodic variation in the density of Cooper pairs (pairs of blue arrows pointing up and down) across the surface of a cuprate superconductor. (Davis Lab)

A state of electronic matter first predicted by theorists in 1964 has finally been discovered by Cornell physicists and may provide key insights into the workings of high-temperature superconductors.

The prediction was that “Cooper pairs” of electrons in a superconductor could exist in two possible states. They could form a “superfluid” where all the particles are in the same quantum state and all move as a single entity, carrying current with zero resistance – what we usually call a superconductor. Or the Cooper pairs could periodically vary in density across space, a so-called “Cooper pair density wave.” For decades, this novel state has been elusive, possibly because no instrument capable of observing it existed.

Now a research team led by J.C. Séamus Davis, the James Gilbert White Distinguished Professor in the Physical Sciences and a member of the Kavli Institute at Cornell for Nanoscale Science, and Andrew P. Mackenzie, director of the Max-Planck Institute CPMS in Dresden, Germany, has developed a new way to use a scanning tunneling microscope (STM) to image Cooper pairs directly.

The work was carried out by Davis Group members Mohammed Hamidian (now at Harvard) and Stephen Edkins (a graduate student at St. Andrews University in Scotland), and is published in the April 13 online edition of the journal Nature.

Superconductivity was first discovered in metals cooled almost to absolute zero (-273.15 degrees Celsius or -459.67 Fahrenheit). Recently developed materials called cuprates – copper oxides laced with other atoms – superconduct at temperatures as “high” as 148 degrees above absolute zero (-125 Celsius). In superconductors electrons join in pairs that are magnetically neutral so they do not interact with atoms and can move without resistance.

Hamidian and Edkins studied a cuprate incorporating bismuth, strontium and calcium (Bi2Sr2CaCu2O8) using an incredibly sensitive STM that scans a surface with sub-nanometer resolution, on a sample that is refrigerated to within a few thousandths of a degree above absolute zero.

Tunneling Cooper pairs create a current flow between the sample and the tip that reveals the density of Cooper pairs at any point, and this showed periodic variations across the sample, with a wavelength of four crystal unit cells. The team had found a Cooper pair density wave state in a high-temperature superconductor, confirming the 50-year-old prediction.

A collateral finding was that Cooper pairs were not seen in the vicinity of a few zinc atoms that had been introduced as impurities, making the overall map of Cooper pairs into “Swiss cheese.”

Density waves may help to explain the so-called “pseudogap” where some materials show symptoms of being superconductors but don’t actually superconduct. Since the pseudogap often appears at relatively high temperatures, understanding it could lead to higher-temperature superconductors that would revolutionize electric power generation and transport.

The researchers noted that their technique could be used to study other cuprates as well as recently discovered iron-based superconductors.