During the next decade, a delicate measurement of primordial light could reveal convincing evidence for the popular cosmic inflation theory, which proposes that a random, microscopic density fluctuation in the fabric of space and time gave birth to the universe in a hot big bang approximately 13.7 billion years ago. 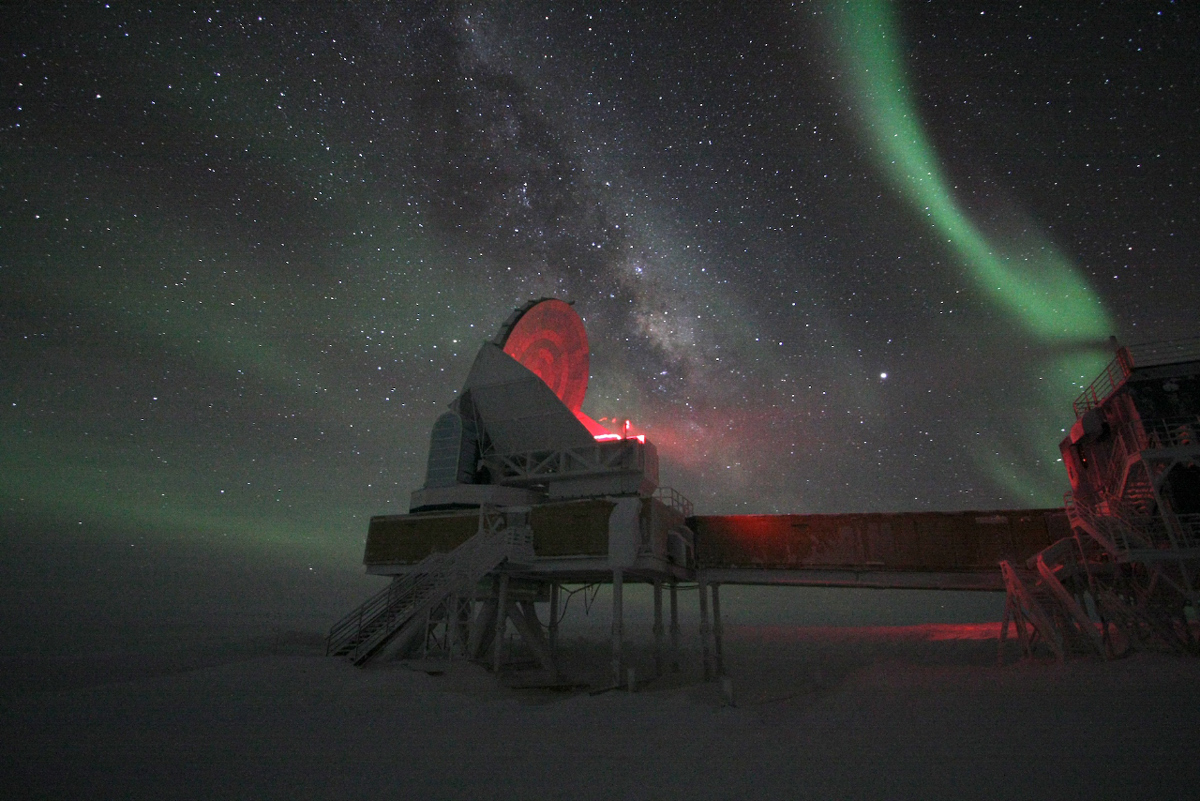 The aurora australis (southern lights) over the South Pole Telescope.(Courtesy of Keith Vanderlinde)

Among the cosmologists searching for these weak signals will be John Carlstrom, Professor and Director of the University of Chicago’s Kavli Institute for Cosmological Physics. Carlstrom operates the South Pole Telescope (SPT) with a team of scientists from nine institutions in their search for evidence about the origins and evolution of the universe.

Now on their agenda is putting cosmic inflation theory to its most stringent observational test so far. The test: detecting extremely weak gravity waves, which Einstein’s theory of general relativity predicts that cosmic inflation should produce.

“If you detect gravity waves, it tells you a whole lot about inflation for our universe,” Carlstrom said. It also would rule out various competing ideas for the origin of the universe. “There are fewer than there used to be, but they don’t predict that you have such an extreme, hot big bang, this quantum fluctuation, to start with,” he said. Nor would they produce gravity waves at detectable levels.

Carlstrom and his colleague Scott Dodelson will be on panel of cosmologists discussing these and related issues on Monday, Feb. 16 at the American Association for the Advancement of Science annual meeting in Chicago. Their session, “Origins and Endings: From the Beginning to the End of the Universe,” will meet from 9:30 a.m. to 12:30 p.m. at the Hyatt Regency Hotel.

Fellow panelists will include Alan Guth of the Massachusetts Institute of Technology. In 1979, Guth proposed the cosmic inflation theory, which predicts the existence of an infinite number of universes. Unfortunately, cosmologists have no way of testing this prediction.

“Since these are separate universes, by definition that means we can never have any contact with them. Nothing that happens there has any impact on us,” said Dodelson, a scientist at Fermi National Accelerator Laboratory and at the University’s Kavli Institute.

But there is a way to probe the validity of cosmic inflation. The phenomenon would have produced two classes of perturbations. The first, fluctuations in the density of subatomic particles happen continuously throughout the universe, and scientists have already observed them.

“Usually they’re just taking place on the atomic scale. We never even notice them,” Dodelson said. But inflation would instantaneously stretch these perturbations into cosmic proportions. “That picture actually works. We can calculate what those perturbations should look like, and it turns out they are exactly right to produce the galaxies we see in the universe.” 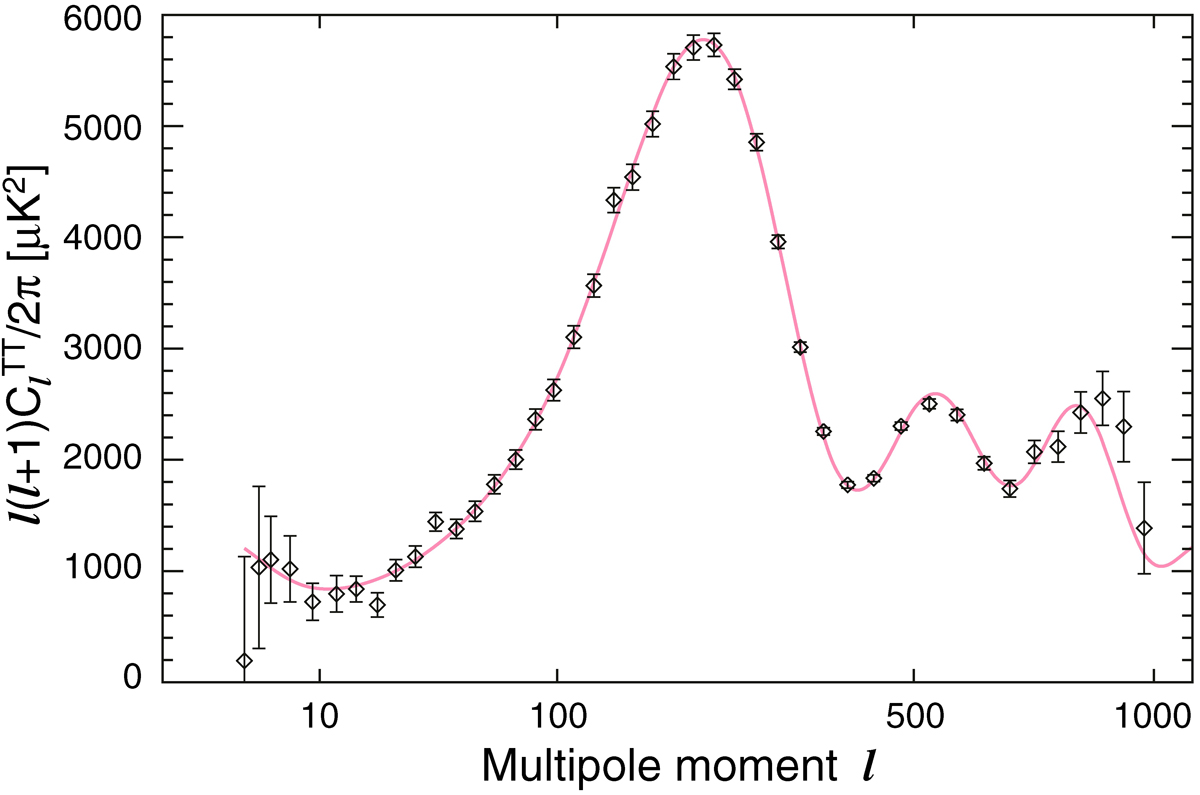 NASA’s Wilkinson Microwave Anisotropy Probe collected data that produced this chart of sound waves from the universe. Called a power spectrum, the chart plots the cosmic microwave background radiation as ripples of different sizes across the sky. The data are consistent with predictions of cosmic inflation theory.(Courtesy of the WMAP Science Team)

The second class of perturbations would be gravity waves—Einsteinian distortions in space and time. Gravity waves also would get promoted to cosmic proportions, perhaps even strong enough for cosmologists to detect them with sensitive telescopes tuned to the proper frequency of electromagnetic radiation.

“We should be able to see them if John’s instruments are sensitive enough,” Dodelson said.

Carlstrom and his associates are building a special instrument, a polarimeter, as an attachment to the SPT, to search for gravity waves. The SPT operates at submillimeter wavelengths, between microwaves and the infrared on the electromagnetic spectrum.

Cosmologists also use the SPT in their quest to solve the mystery of dark energy. A repulsive force, dark energy pushes the universe apart and overwhelms gravity, the attractive force exerted by all matter. Dark energy is invisible, but astronomers are able to see its influence on clusters of galaxies that formed within the last few billion years.

The SPT detects the cosmic microwave background (CMB) radiation, the afterglow of the big bang. Cosmologists have mined a fortune of data from the CMB, which represent the forceful drums and horns of the cosmic symphony. But now the scientific community has its ears cocked for the tones of a subtler instrument—gravitational waves—that underlay the CMB.

“We have these key components to our picture of the universe, but we really don’t know what physics produces any of them,” said Dodelson of inflation, dark energy and the equally mysterious dark matter. “The goal of the next decade is to identify the physics.”