Physicists at the California Institute of Technology (Caltech) have developed a nanoscale device that can be used for force detection, optical communication, and more. The device exploits the mechanical properties of light to create an optomechanical cavity in which interactions between light and motion are greatly strengthened and enhanced. These interactions, notes Oskar Painter, associate professor of applied physics at Caltech, and the principal investigator on the research, are the largest demonstrated to date.

The device and the work that led to it are described in a recent issue of the journal Nature.

The fact that photons of light, despite having no mass, nonetheless carry momentum and can interact with mechanical objects is an idea that dates back to Kepler and Newton. The mechanical properties of light are also known to limit the precision with which one can measure an object's position, since simply by using light to do the measurement, you apply a force and disturb the object.

It was important to consider these so-called back-action effects in the design of devices to measure weak, classical forces. Such considerations were part of the development of gravity-wave detectors like the Laser Interferometer Gravitational-Wave Observatory (LIGO). These sorts of interferometer-based detectors have also been used at much smaller scales, in scanning probe instruments used to detect or image atomic surfaces or even single electron spins.

To get an idea of how these systems work, consider a mirror attached to a floppy cantilever, or spring. The cantilever is designed to respond to a particular force-say, a magnetic field. Light shining down on the mirror will be deflected when the force is detected-i.e., when the cantilever moves-resulting in a variation in the light beam's intensity that can then be detected and recorded.

"LIGO is a huge multikilometer-scale interferometer," notes Painter. "What we did was to take that and scale it all the way down to the size of the wavelength of light itself, creating a nanoscale device."

They did this, he explains, because as these interferometer-based detectors are scaled down, the mechanical properties of light become more pronounced, and interesting interactions between light and mechanics can be explored. 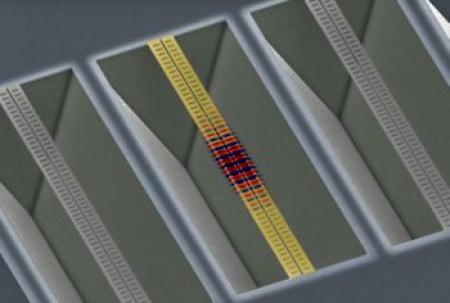 Scanning electron microscope image of an array of "zipper" optomechanical cavities. The scale and sensitivity of the device is set by its physical mass (40 picograms/40 trillionths of a gram) and the nanoscale gap between the two nanobeams (100 nanometers/100 billionths of a meter).
[Credit: Caltech/Matt Eichenfield and Jasper Chan]

They call this nanoscale device a zipper cavity because of the way its dual cantilevers-or nanobeams, as Painter calls them-move together and apart when the device is in use. "If you look at it, it actually looks like a zipper," Painter notes.

"Zipper structures break new ground on coupling photonics with micromechanics, and can impact the way we measure motion, even into the quantum realm," adds Kerry Vahala, Caltech's Ted and Ginger Jenkins Professor of Information Science and Technology and professor of applied physics, and one of the paper's authors. "The method embodied in the zipper design also suggests new microfabrication design pathways that can speed advances in the subject of cavity optomechanics as a whole."

To create their zipper cavity device, the researchers made two nanobeams from a silicon chip, poking holes through the beams to form an effective optical mirror. Instead of training a light down onto the nanobeams, the researchers used optical fibers to send the light "in plane down the length of the beams," says Painter. The holes in the nanobeams intercept some of the photons, circulating them through the cavity between the beams rather than allowing them to travel straight through the device.

Or, to be more precise, the circulating photons actually create the cavity between the beams. As Painter puts it: "The mechanical rigidity of the structure and the changes in its optical response are predominantly governed by the internal light field itself."

Such an interaction is possible, he adds, because the structure is precisely designed to maximize the transfer of momentum from the input laser's photons to the mechanical nanobeams. Indeed, a single photon of laser light zipping through this structure produces a force equivalent to 10 times that of Earth's gravity. With the addition of several thousand photons to the cavity, the nanobeams are effectively suspended by the laser light.

Changes in the intensity and other properties of the light as it moves along the beams to the far end of the chip can be detected and recorded, just as with any large-scale interferometer.

The potential uses for this sort of optomechanical zipper cavity are myriad. It could be used as a sensor in biology by coating it with a solution that would bind to, say, a specific protein molecule that might be found in a sample. The binding of the protein molecule to the device would add mass to the nanobeams, and thus change the properties of the light traveling through them, signaling that such a molecule had been detected. Similarly, it could be used to detect other ultrasmall physical forces, Painter adds.

Zipper cavities could also be used in optical communications, where circuits route information via optical beams of different colors, i.e., wavelengths. "You could control and manipulate what the optical beams of light are doing," notes Painter. "As the optical signals moved around in a circuit, their direction or color could be manipulated via other control light fields." This would create tunable photonics, "optical circuits that can be tuned with light."

Additionally, the zipper cavity could lead to applications in RF-over-optical communications and microwave photonics as well, where a laser source is modulated at microwave frequencies, allowing the signals to travel for kilometers along optical fibers. In such systems, the high-frequency mechanical vibrations of the zipper cavity could be used to filter and recover the RF or microwave signal riding on the optical wave.

Other authors on the Nature paper, "A picogram- and nanometre-scale photonic-crystal optomechanical cavity," include graduate students Matt Eichenfield (the paper's first author) and Jasper Chan, and postdoctoral scholar Ryan Camacho.

Their research was supported by a Defense Advanced Research Projects Agency seeding effort, and an Emerging Models and Technologies grant from the National Science Foundation.