Using devices millionths of a meter in size, physicists at the California Institute of Technology (Caltech) have developed a technique to determine the mass of a single molecule, in real time.

The mass of molecules is traditionally measured using mass spectrometry, in which samples consisting of tens of thousands of molecules are ionized, to produce charged versions of the molecules, or ions. Those ions are then directed into an electric field, where their motion, which is choreographed by both their mass and their charge, allows the determination of their so-called mass-to-charge ratio. From this, their mass can ultimately be ascertained. 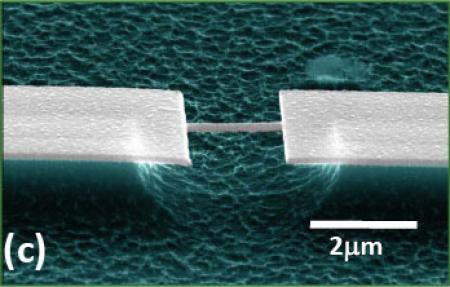 The new technique, developed over 10 years of effort by Michael L. Roukes, a professor of physics, applied physics, and bioengineering at the Caltech and codirector of Caltech's Kavli Nanoscience Institute, and his colleagues, simplifies and miniaturizes the process through the use of very tiny nanoelectromechanical system (NEMS) resonators. The bridge-like resonators, which are 2 micrometers long and 100 nanometers wide, vibrate at a high frequency and effectively serve as the "scale" of the mass spectrometer.

"The frequency at which the resonator vibrates is directly proportional to its mass," explains research physicist Askshay Naik, the first author of a paper about the work that appears in the latest issue of the journal Nature Nanotechnology. Changes in the vibration frequency, then, correspond to changes in mass.

As described in the paper, the researchers used the instrument to test a sample of the protein bovine serum albumin (BSA), which is known to have a mass of 66 kilodaltons (kDa; a dalton is a unit of mass used to describe atomic and molecular masses, with one dalton approximately equal to the mass of one hydrogen atom).

The BSA protein ions are produced in vapor form using an electrospray ionization (ESI) system.The ions are then sprayed on to the NEMS resonator, which vibrates at a frequency of 450 megahertz. "The flux of proteins reaching the NEMS is such that only one to two protein lands on the resonator in a minute," Naik says.

When the BSA protein molecule is dropped onto the resonator, the resonator's vibration frequency decreases by as much as 1.2 kiloHertz-a small, but readily detectable, change. In contrast, the beta-amylase protein molecule, which has a mass of about 200 kDa, or three times that of BSA, causes a maximum frequency shift of about 3.6 kHz.

Because the location where the protein lands on the resonator also affects the frequency shift-falling onto the center of the resonator causes a larger change than landing on the end or toward the sides, for example-"we can't tell the mass with a single measurement, but needed about 500 frequency jumps in the published work," Naik says. In future, the researchers will decouple measurements of the mass and the landing position of the molecules being sampled. This technique, which they have already prototyped, will soon enable mass spectra for complicated mixtures to be built up, molecule-by molecule.

As Roukes points out, "the next generation of instrumentation for the life sciences-especially those for systems biology, which allows us to reverse-engineer biological systems-must enable proteomic analysis with very high throughput. The potential power of our approach is that it is based on semiconductor microelectronics fabrication, which has allowed creation of perhaps mankind's most complex technology."

The paper, "Towards single-molecule nanomechanical mass spectrometry," appears in the July 4 issue of Nature Nanotechnology. The other authors of the paper are graduate student Mehmet S. Hanay and staff scientist Philip Feng, from Caltech, and Wayne K. Hiebert of the National Research Council of Canada. The work was supported by the National Institutes of Health and, indirectly, by the Defense Advanced Research Projects Agency and the Space and Naval Warfare Systems Command.