Caltech president Jean-Lou Chameau was in Paris on Monday, December 12, to announce the launch of Analytical Pixels, the first start-up company to emerge from the research and development programs of the joint Alliance for Nanosystems VLSI (very-large-scale-integration)—a collaboration between Caltech’s Kavli Nanoscience Institute (KNI) and the Micro and Nanotechnologies Innovation Campus (Minatec) of the Commissariat à l’Energie Atomique et aux Energies Alternatives (CEA)-Leti research institute in Grenoble, France. 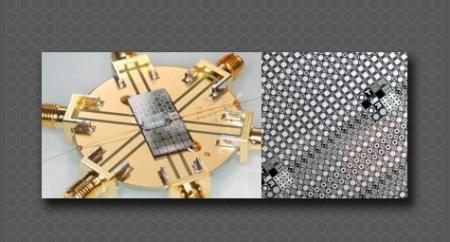 Michael Roukes, Robert M. Abbey Professor of Physics, Applied Physics, and Bioengineering at Caltech and codirector of the KNI, and CEA-Leti director Laurent Malier were also present for the announcement.

In 2007, Caltech and CEA-Leti forged the Alliance to realize the potential of nanoscale systems. Up to that date, progress in the domain of active nanosystems–devices powered up, like transistors, but capable of enhanced functions such as chemical and biological sensing–had been slow, largely due to the challenge of merging nanosensor device fabrication and state-of-the-art microchip mass production at the foundry-scale.

Since then, CEA-Leti Minatec researchers have been collaborating with Caltech/KNI scientists to transform academic, nanotechnology-based prototypes into robust, complex sensing systems. The initial focus of the Alliance has been on the large-scale integration of bio/chemical sensors. This involves converting proven academic nanoscale methodologies into well-validated electronic foundry processes at the wafer scale.

The start-up company will focus on the design, manufacture, and commercialization of multi-gas sensing systems created over the past five years in the field of nanoelectromechanical devices, read-out electronics, and system integration, and built on two decades of prior research carried out at Caltech. The sensing systems, which are based on a new generation of nano-enabled chromatographs, will have applications in various markets, including oil, gas, and refinery production; air-quality monitoring; and breath-based analysis systems for the early detection of biomarkers for medical diagnoses.

"I applaud the launch of the first industrial initiative from the Alliance," said Chameau. "It is a testament to the transatlantic cooperation between aligned partners that are dedicated to accelerating the advancement of scientific concepts initially developed at Caltech and transformed by Leti to meet large-scale low-cost manufacturing requirements."