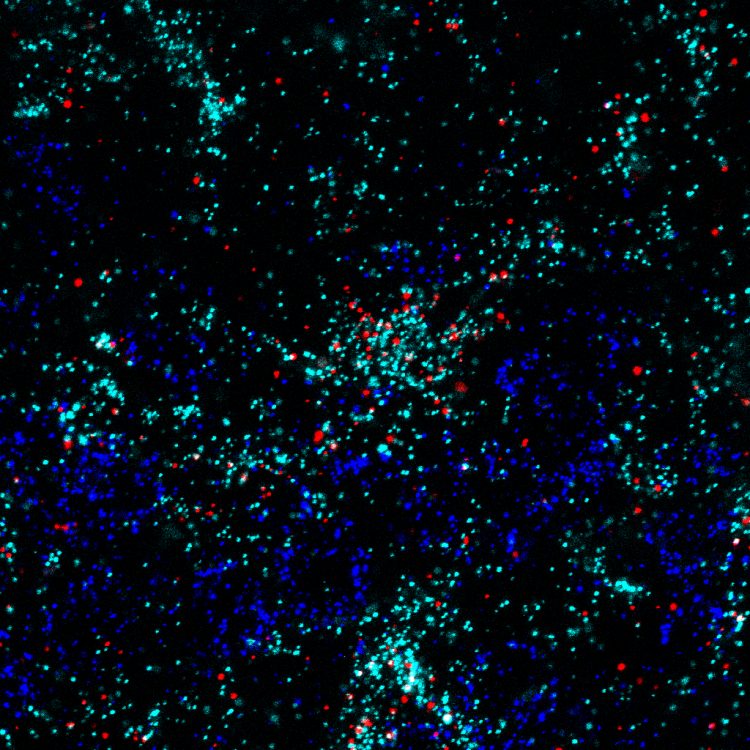 Astrocytes are the main cell type in the brain producing Chrdl1. Through a technique called fluorescence in situ hybridization, the RNA of different proteins is tagged with fluorescent labels. In the image, Chrdl1 is in red, astrocytes in cyan (teal) and neurons in dark blue, in the upper layers of the mouse visual cortex. The signal from Chrdl1 overlaps with astrocytes, but not with neurons, indicating that astrocytes are the cells that mainly produce Chrdl1. (Salk Institute)

When we’re born, our brains have a great deal of flexibility. Having this flexibility to grow and change gives the immature brain the ability to adapt to new experiences and organize its interconnecting web of neural circuits. As we age, this quality, called “plasticity,” lessens.

In a study published October 18, 2018 in Neuron, a team from the Salk Institute has shown that astrocytes—long-overlooked supportive cells in the brain—help to enable the brain’s plasticity, a new role for astrocytes that was not previously known. The findings could point to ways to restore connections that have been lost due to aging or trauma.

“We knew from our previous work that astrocytes are important for the development of the brain; however, we knew very little about the role of astrocytes in the adult brain,” says Nicola Allen, assistant professor and the study’s senior author. “To investigate this role, we used a lot of techniques in the lab to identify a signal made by astrocytes that’s very important for brain maturation.”

The signal turned out to be a protein astrocytes secrete called Chrdl1, which increases the number and maturity of connections between nerve cells, enabling the stabilization of neural connections and circuits once they finish developing.

To further understand the role of Chrdl1, the team developed mouse models with the gene disabled by introduced mutations. These mice had a level of plasticity in their brains that was much higher than normal. Adult mice with the Chrdl1 mutation had brain plasticity that looked very much like that of young mice, whose brains are still in early stages of development.

“It’s important to study brain plasticity, because it teaches us how the brain remodels itself in response to new experiences,” says first author Elena Blanco-Suarez, a research associate in Allen’s lab. “Although some degree of plasticity is important, it decreases as we become older. Nature has designed these circuits to become more stable and less flexible. Otherwise, our brains would not mature and we would experience our whole life like a young child does.” 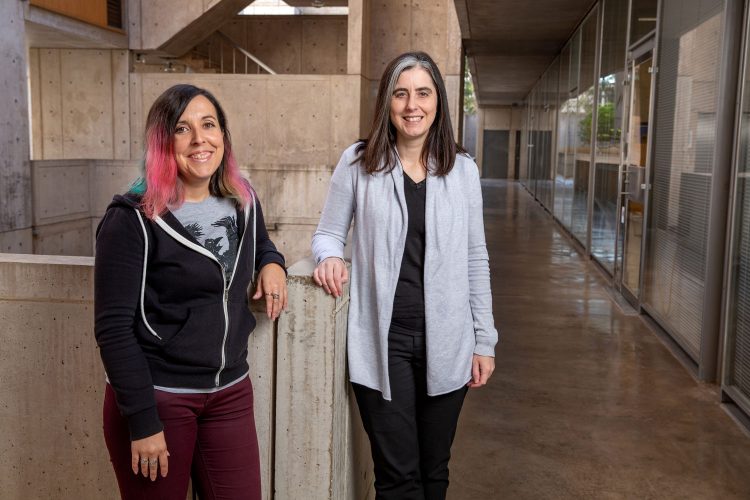 Not much is known about the role of Chrdl1 in humans, but one study of a family with a Chrdl1 mutation showed they performed extremely well in memory tests. Other studies have shown the level of the gene encoding Chrdl1 is altered in schizophrenia and bipolar disorder, suggesting that Chrdl1 may have important roles in both health and disease.

Future research by the team will dive deeper into the relationships between astrocytes and neurons and look for potential ways to use astrocytes as therapy.

“We’re interested in learning more about what the astrocytes are secreting into the brain environment and how those signals affect the brain,” says Allen, who is an advisory board member at the Kavli Institute of Brain and Mind. “We plan to look at this relationship both early in development and in situations where those connections are lost and you want to stimulate repair, like after someone has had a stroke.”

Other researchers on the paper were Tong-Fei Liu and Alex Kopelevich of Salk.