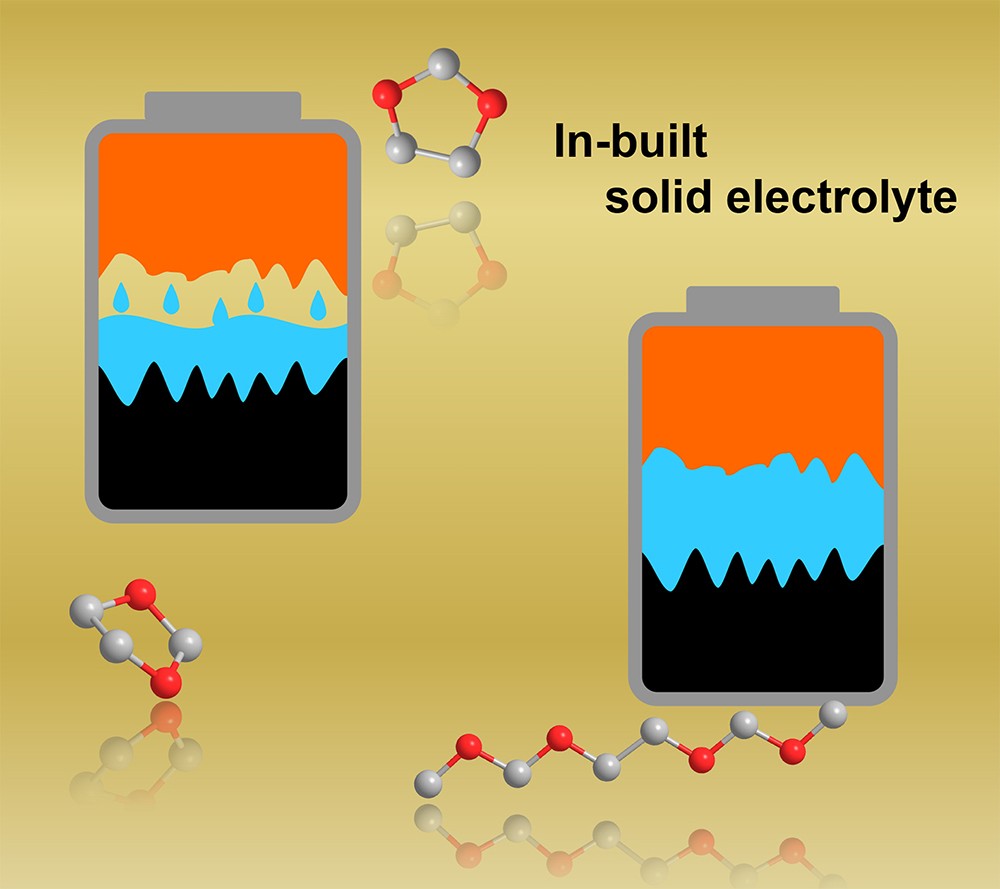 The new method for designing solid-state batteries starts with liquid electrolytes inside the electrochemical cell. Special molecules then initiate polymerization, improving contact between the electrolyte and electrodes. (Qing Zhao/Provided)

People don’t ask too much from batteries: Deliver energy when it’s needed and for as long as it is wanted, recharge quickly and don’t burst into flames.

A rash of cell phone fires in 2016 jolted consumer confidence in lithium-ion batteries, a technology that helped usher in modern portable electronics but has been plagued by safety concerns since it was introduced in the 1980s. As interest in electric vehicles revs up, researchers and industry insiders are searching for improved rechargeable battery technology that can safely and reliably power cars, autonomous vehicles, robotics and other next-generation devices.

New Cornell research advances the design of solid-state batteries, a technology that is inherently safer and more energy-dense than today’s lithium-ion batteries, which rely on flammable liquid electrolytes for fast transfer of chemical energy stored in molecular bonds to electricity. By starting with liquid electrolytes and then transforming them into solid polymers inside the electrochemical cell, the researchers take advantage of both liquid and solid properties to overcome key limitations in current battery designs.

“Imagine a glass full of ice cubes: Some of the ice will contact the glass, but there are gaps,” said Qing Zhao, a postdoctoral researcher and lead author on the study, “Solid-State Polymer Electrolytes With In-Built Fast Interfacial Transport for Secondary Lithium Batteries,” published March 11 in Nature Energy.

“But if you fill the glass with water and freeze it, the interfaces will be fully coated, and you establish a strong connection between the solid surface of the glass and its liquid contents,” Qing said. “This same general concept in a battery facilitates high rates of ion transfer across the solid surfaces of a battery electrode to an electrolyte without needing a combustible liquid to operate.”

The key insight is the introduction of special molecules capable of initiating polymerization inside the electrochemical cell, without compromising other functions of the cell. If the electrolyte is a cyclic ether, the initiator can be designed to rip open the ring, producing reactive monomer strands that bond together to create long chain-like molecules with essentially the same chemistry as the ether. This now-solid polymer retains the tight connections at the metal interfaces, much like the ice inside a glass.

Beyond their relevance for improving battery safety, solid-state electrolytes are also beneficial for enabling next-generation batteries that utilize metals, including lithium and aluminum, as anodes for achieving far more energy storage than is possible in today’s state-of-the-art battery technology. In this context, the solid-state electrolyte prevents the metal from forming dendrites, a phenomenon that can short circuit a battery and lead to overheating and failure.

Despite the perceived advantages of solid-state batteries, industry attempts to produce them at a large scale have encountered setbacks. Manufacturing costs are high, and the poor interfacial properties of previous designs present significant technical hurdles. A solid-state system also circumvents the need for battery cooling by providing stability to thermal changes.

“Our findings open an entirely new pathway to create practical solid-state batteries that can be used in a range of applications,” said senior author Lynden Archer, the James A. Friend Family Distinguished Professor of Engineering in the Smith School of Chemical and Biomolecular Engineering and a member of the Kavli Institute at Cornell for Nanoscale Science.

According to Archer, the new in-situ strategy for creating solid polymer electrolytes is particularly exciting because it shows promise for extending cycle life and recharging capabilities of high-energy-density rechargeable metal batteries.

Other authors are doctoral students Xiaotun Liu and Sanjuna Stalin, and Kasim Khan ’20. The research was supported by the Department of Energy’s Basic Energy Sciences program and through facilities funding from the National Science Foundation.